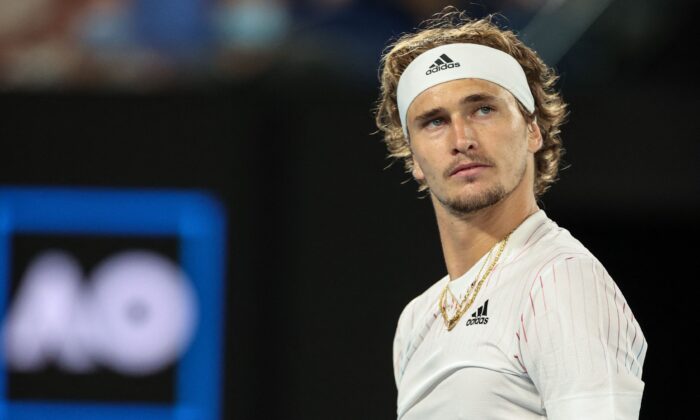 Germany's Alexander Zverev looks on as he plays against Australia's John Millman during their men's singles match on day three of the Australian Open tennis tournament in Melbourne, on Jan. 19, 2022. (Martin Keep/AFP via Getty Images)
Tennis

MELBOURNE—Alexander Zverev believes there are probably more players at the Australian Open who have COVID-19 but they are not being tested, the third seed said on Wednesday.

Frenchman Ugo Humbert said earlier on Wednesday that he had tested positive for the coronavirus, a day after his first-round defeat by compatriot Richard Gasquet, forcing him to isolate for a week in Australia.

Players must be fully vaccinated to compete at the Australian Open, a rule that forced the government to deport world number one Novak Djokovic due to his unvaccinated status.

“We are allowed to go outside to eat, allowed to do whatever we want, so I think it’s natural that more people get COVID,” Zverev told reporters after dispatching Australia’s John Millman in straight sets in the second round.

“I think quite a few players had it when they arrived. Quite a few players I think have it now. We’re not getting tested, so I think if we would get tested there would be probably more positives than there are now, in a way.”

Reuters has contacted Tennis Australia for comment. Australia’s ABC News reported players must conduct daily rapid antigen tests by themselves while supervised tests are conducted on the day they arrive and between days five and seven of their stay.

Bernard Tomic had criticized the COVID-19 testing protocols during the qualifiers last week, saying: “I can’t believe nobody is getting tested. They’re allowing players to come onto the court with rapid tests in their room … No official PCR testing.”

Zverev said he is taking all precautions and staying in his own bubble to avoid infection as the 24-year-old Olympic champion seeks his maiden Grand Slam title.

“I haven’t been anywhere but the hotel room and the courts, so I’m kind of doing a bubble for myself, simply because I don’t want to take any risks and I want to give myself the best chance possible to do well here.”