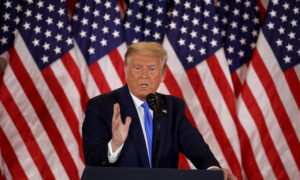 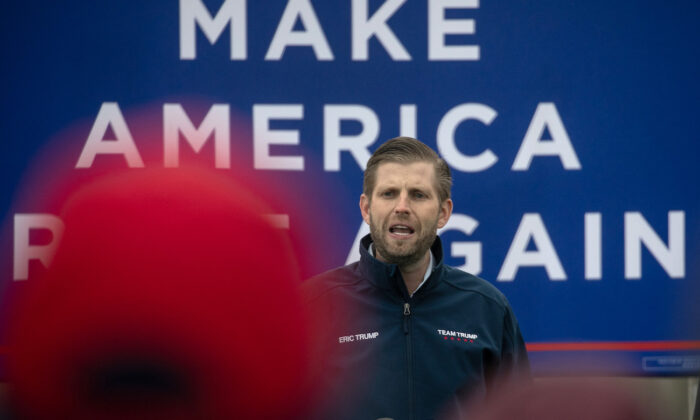 President Donald Trump’s campaign held a press conference in Philadelphia on Wednesday afternoon where members asserted a Trump win for the state and announced a lawsuit in Pennsylvania as they alleged there may be fraud and corruption at play.

The campaign later filed new lawsuits in Pennsylvania and Michigan to stop counting votes in the states, arguing that officials had failed to allow fair access to counting sites. The campaign also later filed another suit in Georgia seeking to separate out late-arriving votes.

Eric Trump alleged fraud in Philadelphia. “They’re trying to make a mockery of the election of this country,” he said. “My father is up by almost half a million votes in this state, with 86 percent reported and plenty of red counties left to go, plenty of red counties left to go. We’re going to win Pennsylvania, but they’re trying to cheat us out of it because they know it’s their only path to victory. They know it’s the only path to victory. And so we came here today.”

Rudy Giuliani, former mayor of New York City and now Trump’s personal lawyer, said that mail-in ballots are “highly suspicious,” “considered the most prone to fraud,” and “can easily be fraudulent.” He said that what he is witnessing is “among one of the most anti-democratic things I’ve ever seen or encountered.”

“We were supposed to be allowed by law to observe the counting of the ballots,” he said. “Now, ‘observe’ means to any intelligent person being able to look at it. The way it’s interpreted by the Democrat crooked machine of Philadelphia is that the observers can be 20 or 30 feet away, never able to see the ballot itself, never able to see if it was properly postmarked, properly addressed, properly signed on the outside—all the things that often lead to disqualification of ballots or make it very easy to dump 50,000 totally fraudulent ballots because they’re not observed.”

“This went on for 20 hours while all of you thought there was some kind of legitimate count going on here in Philadelphia, it was totally illegitimate,” Giuliani added. “So we went back to court, and we went to a Democrat judge—no need to tell you what the result is for Philadelphia before a Democrat judge, obviously a political hack, who doesn’t know the meaning of the word observe.

“‘Observe’ means to be able to took. Not a single Republican has been able to look at any one of these mail ballots. They could be from Mars as far as we’re concerned. Or they could be from the Democratic National Committee. Joe Biden could have voted 50 times or 50,000 times,” he said.

“The ballots could be from Camden,” Giuliani said, adding that Philadelphia “has a reputation” for voter fraud, and “dead people voting,” and that “people bused in from Camden voting here.”

He also said that the Trump campaign’s Wisconsin lawsuit is addressing “exactly the same” phenomenon in Pennsylvania. He noted, however, that unlike Pennsylvania, Wisconsin also saw some 120,000 ballots appear around 3 or 4 a.m. Wednesday, the day after Election Day.

Giuliani said he was informed by former congressman John Sweeney that there are similar situations in Arizona, Nevada, and Michigan, where people were allegedly not allowed to closely observe the counting of the ballots.

Reiterating that mail-in voting is prone to fraud, he shared that the Trump campaign may seek to have deducted from the count the votes that were not allowed to be closely observed.

“President Trump has won Pennsylvania. I’ve never heard of a count where you’re ahead by 400,000 with 80 plus percent counted, and they haven’t called it for you yet … We’re going to win this election. We’ve actually won it, just a matter of counting the votes fairly,” Giuliani added.

Gov. Tom Wolf has condemned the lawsuit from the Trump campaign. In a statement, he asserted: “In Philadelphia, officials are administering the election with the highest degree of transparency. There has been a livestream of the ballot-counting process available throughout the count, and all parties have canvass observers.”

He characterized the lawsuit from the Trump campaign as an attempt to “subvert the democratic process” and called it “disgraceful.”

“Pennsylvania is going to count every vote and make sure that everyone has their voice heard. Pennsylvania is going to fight every single attempt to disenfranchise voters and continue to administer a free and fair election. Our election officials at the state and local level should be free to do their jobs without intimidation or attacks,” he said.

“Pennsylvania will fight every attempt to undermine the election. We will count every vote.”

Former Florida Attorney General Bondi and Trump campaign senior adviser Lewandowski at the press conference both asserted a Trump victory over the state and said that they hope for a fair counting of the votes.

“We are thrilled to have won Pennsylvania with 87 percent of the vote in, and we’re up almost 400,000 votes. So we’re thrilled,” Bondi asserted. She added that she would be releasing an example of what she called efforts by election officials to prevent poll watchers from closely observing the counting of the ballots.

“Until the last vote is counted, General Bondi and I will be here,” Lewandowski said.

“We are going to accurately count every single ballot,” Boockvar said, noting that military are not due until a week after Election Day.

“Next Tuesday is the deadline for military and overseas voters to cast their ballots,” she said. “And we want to make sure that not only every civilian absentee and mail-in valid voter is counted, but also that every man and woman who are serving our country, that their votes are counted.”

This is the first general election in Pennsylvania where voters could vote by mail without providing an excuse. According to a press release from Wolf and Boockvar on election night, more than 2.5 million mail ballots were cast.