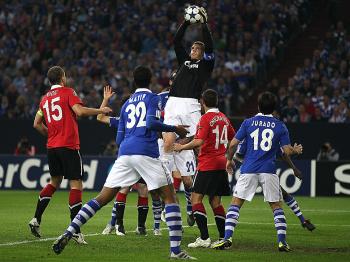 Wembley Beckons for Man Utd After Impressive Win Away to Schalke

By Denis Charlton
Print
Manchester United have defeated FC Schalke 0-2 away from home in the first leg of their European Champions League semi final, and the English club now looks odds-on favorites to go through to the final at Wembley, the scene of their first triumph in the competition in 1968.

Schalke would have been encouraged by United’s indifferent record against German opposition at this stage of the competition: the English club having lost to Bayer Leverkusen in 2002 and put out by Bayern Munich in last year’s campaign on the away goals rule.

In fact the Germans started brightly and Edwin van der Sar, though not particularly troubled, had a couple of early touches before the game was two minutes old. Both van der Sar and Ryan Giggs were playing their 141st match in Europe.

Schalke central defender Benedickt Howedes, who was so impressive against Inter Milan in the previous round, failed a fitness test prior to the game. It quickly became apparent that United were not here for a scoreless draw and would seek to exploit any vulnerability in the Germans’ defense. The first time United went forward, Wayne Rooney tried his luck from the left corner of the penalty area and his right-footed curler would have found the top corner but for the fingertips of Manuel Neuer.

Next it was Ji-sung Park having a go, but a powerful drive was also well saved by the 24 year-old keeper who some have described as currently the best in the world.

Antonio Valencia crossed for Javier “Chicharito” Hernandez but the Mexican didn’t make the contact he would have liked and this one was relatively easy for Neuer. But on 14 minutes Neuer had to be both alert and brave to foil Hernandez from close range.

United were totally dominant now and in the 21st minute Hernandez made another opportunity for himself by using the run of Valencia as a decoy, turning smartly, only to see his left-footer go just wide of the upright.

Just five minutes later the Mexican was again in the thick of it and from a tight angle just failed to direct the ball in at the far post—Manuel Neuer having stood up big yet again and denied him the necessary space to get off an accurate shot. On another day Chicharito would have already had a hat-trick to his name.

With United’s pressure relentless, Neuer was called upon to push a Ryan Giggs header over the bar. This was possibly Neuer’s finest save so far. The German goalkeeper was running a regular master-class. On the stroke of half time Giggs was played through and again it was Neuer to the rescue.

Thanks to their goalkeeper Schalke went in at half time miraculously still on level terms. United had enjoyed a 64-36 percent superiority in possession over the course of the half.

With the second period underway, Sir Alex Ferguson’s charges continued pretty much where they had left off before the break. In fact they had already created and squandered three more chances before the half was 5 minutes old. Chicharito did finally have the ball in the net in the 50th minute but the offside flag had been raised.

At the other end Van der Sar was tested for the first time by a swerving shot from Edu but the veteran was up to the task and held on so their would be no rebound for the likes of Raul Gonzalez to pounce upon. It was a night of very lean pickings indeed for the veteran Spanish goal-poacher who had scored four in his last three European outings against United—all for Real Madrid of course.

But if Schalke fans thought this might be one of those nights where a team is under the cosh for 89 minutes and then nicks it with a last minute breakaway, they were to be disappointed.

In the 67th minute United finally found a way through courtesy of a glorious defense splitting pass from Rooney that put Ryan Giggs through one on one with the keeper, and this time it was Giggs that prevailed. A couple of minutes later Hernandez and Rooney combined for a second that was dispatched clinically by the English international.

A long range effort from substitute Sergio Escudero was all Schalke could muster in reply and, while it was a good enough strike, van der Sar never looked like being beaten. In fact United could have had a third just before the end but Patrice Evra directed his shot just wide of Neuer’s left-hand post.

The word is that Manuel Neuer will sign for Bayern Munich in the summer. With van der Sar due to retire, United may well be now devising a strategy to try and lure the impressive young German to Old Trafford.

Sir Alex Ferguson described Neuer’s performance on the Manchester united website after the game:"He was fantastic. It was one of the best performances I’ve seen against Manchester United."

Sir Alex also paid tribute to his own players saying: "Our concentration, the intensity of our play and the speed of our passing were all excellent tonight. It was a top performance. I’m really pleased with the players, every one of them has done fantastically well tonight."