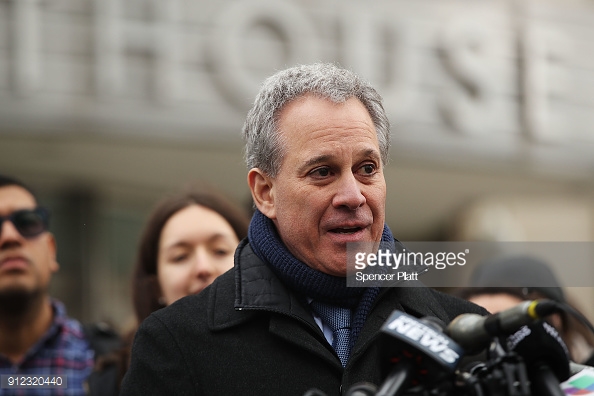 NEW YORK—Film and TV studio The Weinstein Co., whose ex-chairman Harvey Weinstein has been accused of sexual harassment and assault, filed for bankruptcy on March 19 and said it was ending all nondisclosure agreements that may have silenced some women.

The filing in U.S. Bankruptcy Court in Delaware follows accusations by more than 70 women against the company’s co-founder, Harvey Weinstein, who was one of Hollywood’s most influential men, of sexual misconduct, including rape. Weinstein has denied having nonconsensual sex with anyone.

The women who spoke out against Weinstein spurred a national movement against sexual harassment, with victims sharing their stories on social media and labeling them under the hashtag #MeToo.

Texas private equity firm Lantern Capital agreed to buy The Weinstein Co. out of bankruptcy for $310 million. The firm’s offer, saving the studio from winding down its business, will be subject to higher and better bids in a court-supervised auction scheduled for May 2.

The deadline for other bids is April 30.

Lantern had been a potential investor in former Obama administration official Maria Contreras-Sweet’s bid for the studio, which was ultimately terminated.

The Weinstein Co.’s bankruptcy will halt victims’ lawsuits against the company and any sexual misconduct claims would likely only be compensated after secured creditors are paid in full. Contreras-Sweet’s bid for the studio included an $80 million to $90 million compensation fund that would supplement any insurance payouts victims would receive.

The Weinstein Co., which has won 28 Academy Awards, owns a film library of 277 feature films that have generated over $2 billion in aggregate box office receipts worldwide.

Yet the company said in court papers it had lost about 25 percent of its workforce and many of its longtime business partners since October 2017, when accusations against Harvey Weinstein became public.

“It is an understatement to say that the last six months have been trying for the company,” Chief Restructuring Officer Robert Del Genio said in court papers.

As part of the bankruptcy filing, The Weinstein Co. said it released anyone “who suffered or witnessed any form of sexual misconduct by Harvey Weinstein” from nondisclosure agreements.

“Since October, it has been reported that Harvey Weinstein used nondisclosure agreements as a secret weapon to silence his accusers. Effective immediately, those ‘agreements’ end,” the company said in an emailed statement.

“This is a watershed moment for efforts to address the corrosive effects of sexual misconduct in the workplace,” Schneiderman said in a statement after the company’s announcement on March 19.

In its filing, the Weinstein Company listed $500 million to $1 billion in both liabilities and assets.

The studio has spent months looking for a buyer or investor. Before the deal with Contreras-Sweet’s group failed, The Weinstein Co. had tried securing rescue financing from other investors.

Lionsgate Entertainment Corp. had made an earlier offer for some of the company’s assets, as had Qatar-owned film company Miramax, which was founded by Harvey Weinstein and Bob Weinstein. Both could be among potential bidders in the auction.

Movie producer Killer Content also said bankruptcy would be the best option for the company, and that it may be interested in the studio’s assets in a bankruptcy auction.

The Weinstein Co. also won commitments from its bank lenders for a $25 million bankruptcy loan.

Launched in October 2005, the studio produced and distributed critically acclaimed hits including “The King’s Speech” and “Silver Linings Playbook,” as well as TV series such as long-running fashion reality competition “Project Runway.”