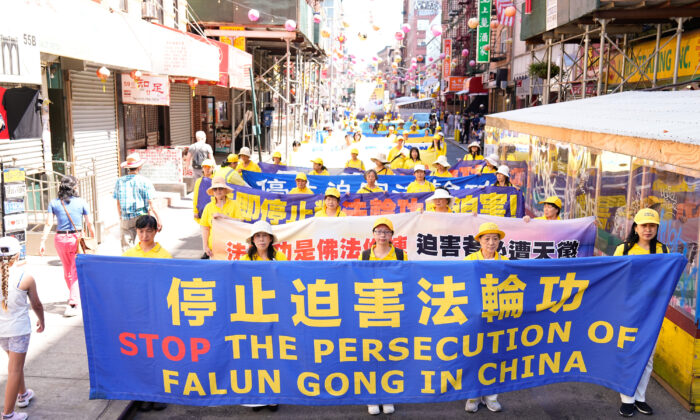 Falun Gong practitioners take part in a parade to commemorate the 23rd anniversary of the persecution of the spiritual discipline in China, in New York's Chinatown on July 10, 2022. (Larry Dye/The Epoch Times)
Thinking About China

The Chinese Communist Party (CCP) has been emboldened by the world’s lack of serious response to their crimes against humanity.

Let’s face it: The CCP has been guilty of crimes against humanity virtually since its inception—especially since assuming control of China at the point of a gun in 1949. Estimates vary, but as many as 80 million people have been tortured and killed by the CCP since the Party was founded in 1921. Minority and religious groups in China have borne the brunt of the CCP’s fury—with Tibetans, Uyghurs, Christians, Muslims, and Falun Gong adherents having suffered relentless persecution over the years.

By way of example, let us examine the persecution and genocide practiced by CCP thugs against Falun Gong.

July 20 marks the 23rd anniversary of the persecution of Falun Gong by the CCP.

Falun Gong, also called Falun Dafa, is a spiritual practice whose adherents are peaceful and nonviolent by definition and practice.

Founded in 1992 by Li Hongzhi, the spiritual discipline is described by the Falun Dafa Information Center as a combination of “meditation and gentle exercises (similar to yoga or tai chi) with a moral philosophy centered on the tenets of Truthfulness, Compassion, and Tolerance (or in Chinese, Zhen 真, Shan 善, Ren 忍),” which “represents a direct and authentic connection to genuine traditional Chinese culture.”

The three Falun Gong tenets of truthfulness, compassion, and tolerance are anathema to the CCP, which prizes deceit, lies, intolerance, and violence against dissenters. These characteristics are most sought by Chinese communists in maintaining their brutal control over the Chinese citizenry, especially those from “disfavored minorities.”

By the mid-1990s, the number of Falun Gong practitioners had blossomed to 70 million–100 million, according to official data. The CCP considered the continuing spread of Falun Gong principles to the Chinese people as a direct domestic threat to the Party’s never-ending quest for legitimacy. The CCP could not co-opt those who followed Falun Gong; they remained true to their three tenets.

The persecution of Falun Gong adherents was initiated by then-Chinese leader Jiang Zemin on July 20, 1999, when practitioners were publicly declared to be a “threat to the government.” According to Minghui.org, a U.S.-based website that chronicles the CCP’s campaign against the practice, “Under Jiang’s personal direction, the CCP established the 610 Office, an extralegal security organization with the power to override the police and judicial systems and whose sole function is to carry out the persecution of Falun Dafa.”

Unable to entirely stamp out the practice, the CCP has ratcheted up the persecution during the past 23 years, from unlimited detentions to forced reeducation efforts, to more aggressive physical and psychological torture and the forced harvesting of organs from Falun Gong practitioners.

The selling of human organs has become a significant money maker for the communists.

In March 2020, the China Tribunal published a “full judgment” resulting from its independent inquiry into allegations of forced organ harvesting from prisoners of conscience and others in China, as well as the commission of other heinous acts on Chinese citizens.

Gut-wrenching and horrific personal stories and evidence of torture are documented in the judgment and also in recent articles from Minghui.org found here and here.

The international response to the persecution—and genocide, by most definitions—of Falun Gong has been muted but has grown in recent years. International organizations have condemned the acts, and even some governments have weighed in with an outflow of proclamations, determinations, and “strong words.”

For example, the U.S. State Department condemned the incarceration of Falun Gong practitioners just prior to the start of the 2022 Winter Olympics, as reported here. The State Department also detailed the CCP’s atrocities against Falun Gong and other minority groups in China, in its annual “Country Reports on Human Rights Practices” released in March 2021.

According to the Falun Dafa Australia Information Centre, “During the World Falun Dafa Day celebration in May [2022], Falun Dafa Associations across the U.S. received many proclamation letters from their state-, county-, and city-level officials expressing admiration for practitioners’ peaceful efforts to resist the persecution.”

This is all well and good, but where are the teeth—the sanctions and other crippling actions—that should be directed against the CCP? Yet we see no trade embargoes, no national leader-to-leader confrontations—nothing substantial that would disrupt China’s robust export economy and cause the CCP real pain for its crimes against humanity.

Justice delayed is justice denied. The souls of the Chinese dead cry out for a strong international response to the ongoing persecution and genocide of minority and religious groups such as Falun Gong.

There seems to be no end in sight, because multinational corporations and others are too busy making money in communist China to pay attention to the CCP’s continuing atrocities. For shame.