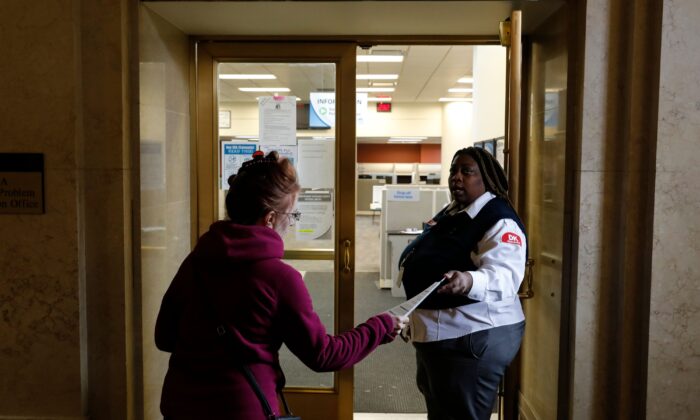 A security guard hands out an instruction sheet outside of a State of Michigan Unemployment Agency office in Cadillac Place in Detroit, Michigan on March 26, 2020. (Jeff Kowalsky/AFP via Getty Images)
Economy

Weekly US Unemployment Claims Fall for First Time in a Month

The number of Americans applying for unemployment benefits for the week ending Jan. 22 declined on a weekly basis for the first time in 2022, the Labor Department said on Jan. 27.

Jobless claims dropped to 260,000, following three weeks of increases amid a surge in Omicron coronavirus variant cases. That was 30,000 fewer than the week prior and lower than the 265,000 that analysts had predicted.

Economists had initially estimated that unemployment claims would decline by 21,000 to 265,000 for the week.

The Labor Department said that almost 1.68 million people were collecting jobless aid for the week ending on Jan. 15, an increase of 51,000 from the previous week’s revised levels.

The four-week average in claims, which compensates for weekly volatility, rose by 15,000 to 247,000, the highest in two months.

Meanwhile, the U.S. unemployment rate fell to 3.9 percent in the December jobs report, a steady decline from nearly 15 percent in the spring of 2020.

“The first decline so far this year in seasonally adjusted new jobless claims is a welcome sign after three consecutive gains,” said Mark Hamrick, senior economic analyst at Bankrate. “Job security has been bolstered by significant improvement in the unemployment rate and solid rise in payrolls over the past year.”

The surge in Omicron had been blamed for the latest uptick in jobless claims, which had reached a 52-week low of 188,000 as of Dec. 4, 2021, with last week’s rise marking the highest number since mid-October.

The variant has put pressure on businesses throughout the country, with many stores noting a decline in customer traffic and with many workers calling out sick.

Economists expect jobless claims to ease lower as the virus appears to fade, which is already happening in regions that were the first to be hit with the Omicron variant.

Unemployment claims, which are a proxy for layoffs, still remain below the pre-pandemic average of around 220,000 a week, as companies compete for workers in a tight labor market.

According to the latest published findings from November, a record 4.5 million workers, confident in their prospects for better opportunities, quit their jobs, while employers posted 10.6 million job openings.

The Federal Reserve on Jan. 26 signaled that it would begin to boost interest rates in March for the first time in three years, due to skyrocketing inflation. The central bank had previously indicated it would wait for the U.S. economy to achieve maximum employment before raising interest rates.

“As Chairman Jerome Powell put it at his news conference, the labor market is very, very strong. For employers, the ongoing struggle to attract and retain workers serves as an underpinning if the question arises whether to cut personnel,” Hamrick said.

“The strong growth seen for all of 2021, and in the most recent quarter, is a solid springboard for the year at hand, even as the Omicron variant takes a toll on lives and the economic recovery.”