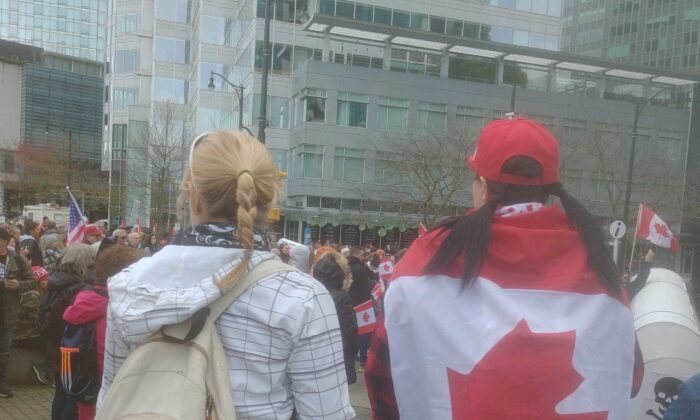 Weekend of Protests in Vancouver Highlight Range of Issues

VANCOUVER—From condemning pipelines, to denouncing legacy media, to shutting down Vancouver’s busiest highway over old growth logging, to protesting a TED Talks conference featuring Bill Gates, hundreds of activists rallied for a variety of causes in Vancouver this past weekend.

On April 8, members of Save Old Growth interrupted rush hour traffic on Vancouver’s North Shore when dozens of protesters blocked the Trans-Canada Highway in both directions for more than an hour.

The group wants the provincial government to end logging in all of B.C.’s old growth forests and has escalated its civil disobedience to get the government’s attention.

“What we’re doing now is causing disruption and we’re breaking the law, and we are getting arrested on purpose in large numbers in order to bring attention to this issue. We know that historically you really need to disrupt the public, and that means usually for a while you’re really hated by the public. But because you’re objectively right, the public will eventually come on board.”

Save Old Growth also had one member begin a hunger strike on March 25 and was joined on April 1 by six more with a demand to meet with Katrine Conroy, BC’s minister of Forests, Lands, Natural Resource Operations and Rural Development, to discuss the issue. Conroy has not met with them so far.

On April 10, the You Are Not Welcome Here protest was held outside the Vancouver Convention Centre where Vancouver’s annual Ted Talks conference is taking place. The rally targeted Bill Gates, one of the scheduled speakers for the five-day conference, because of what detractors claim are his controversial ties to vaccines and their development, including the current COVID-19 vaccines.

Vaccine Choice Canada founder Ted Kuntz spoke at the rally, highlighting his thoughts on the rollout of the vaccines and the government-imposed restrictions which accompanied them.

“These last two years are going to be looked at as the dark ages, when evil, darkness, greed, deception, distortion, and coercion took over,” Kuntz said.

Dr. Daniel Nagase, who has been active challenging Alberta Health Services on their cutbacks to rural communities while opposing mandatory COVID-19 vaccination, implored law enforcement to honour their oath and not allow government to repeat police crackdowns like the one in Ottawa against the Freedom Convoy.

A day earlier on April 9, the latest Media Is The Virus protest happened on Robson Street outside the CTV headquarters. Organizers have held rallies outside the studios of several media buildings in recent weeks against what they say is biased and inflammatory reporting. Co-organizer James Davison said flattering coverage of Prime Minister Justin Trudeau was what prompted him to protest.

“It’s my belief that Justin Trudeau’s main goal is to turn Canada into a communist country,” Davison said to the crowd. “So it’s up to us as Canadian citizens to stand in front of that and I hope we can do it. I mean, at what point in time do you have to say to yourself that they’ve overreached to the point where your livelihood is no longer yours to control?”

One block away at the Vancouver Art Gallery, the This Pipeline Ends Here rally drew several hundred supporters united against the continued development of the federally owned Trans Mountain pipeline.

“We’re here to send the message to Justin Trudeau and the federal government that the Tsleil-Waututh First Nation and the indigenous people of this territory don’t want this project,” coordinator Sven Biggs told The Epoch Times.

Finally, the Burnaby chapter of Action4Canada organized a protest outside the office of NDP leader Jagmeet Singh on April 8, the second in a series of protests in front of NDP politicians’ offices who they say are harming Canadians by supporting COVID-19 mandates and backing Trudeau. Marlene Smith was one of those protesters.

“I’m here to inform the community what is happening within our country, and that Jagmeet Singh is the enabler of tyranny in Canada,” Smith told The Epoch Times.

“There needs to be some accountability. We’re letting them know they’re on notice because it’s British Columbia that is holding the Trudeau government in power, and it’s absolute tyranny.”