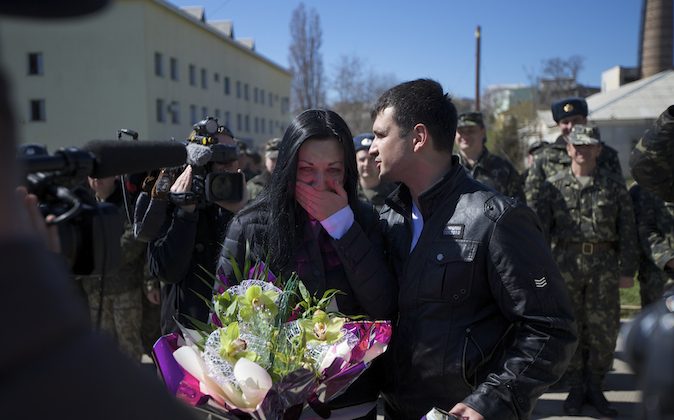 Two Lieutenants, Galina Volosyanchik, center left, and Ivan Benera, center right, react as they are welcomed by senior officers and comrades celebrating their wedding at the Belbek airbase outside Sevastopol, Crimea, on Saturday, March 22, 2014. Two young Lieutenants got married today and arrived to their unit for a short celebration as Russian troops continue to occupy part of the airbase and demand the surrender of Ukrainian airmen. (AP Photo/Ivan Sekretarev)
Crisis in Ukraine

BELBEK AIR BASE, Crimea— As pro-Russian forces surrounded a Ukrainian-held air force base in Crimea, two lieutenants stood side-by-side and tied the knot.

The couple completed their wedding vows Saturday under the gaze of Belbek base commander Col. Yuliy Mamchur, who has been hailed in Ukraine for his refusal to yield to numerically superior pro-Russian forces.

As medic Galina Volosyanchik and communications officer Ivan Benera were being handed a gift and bouquet of flowers, Mamchur said: “You will always remember this, the whole world is here watching.”

As Volosyanchik held her flowers, she wiped away tears. Colleagues then drank champagne and shared toasts.

Hours later, armed pro-Russia forces smashed into and took control of Belbek base, which had been the last major military facility to remain under Ukrainian control in the peninsula.