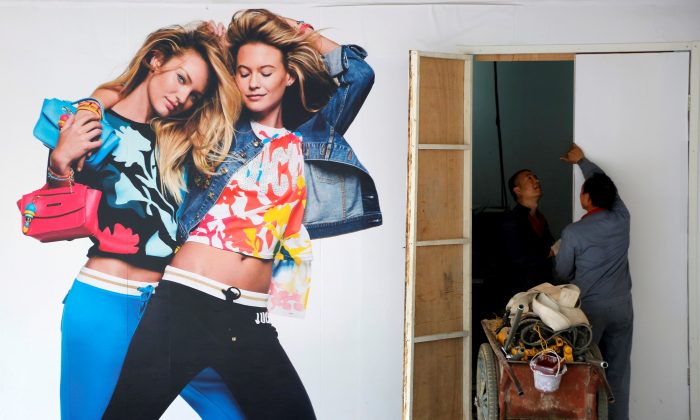 Laborers work next a wall bearing an advertisement at a shopping mall in Beijing on May 9, 2016. (Kim Kyung-Hoon/Reuters)
China Business & Economy

BEIJING —China delivered a mixed economic report card for October on Nov. 14 as softening retail sales pointed to a consumption slowdown, despite a pick-up in industrial output and investment.

Taken together with weak credit data the previous day, the latest readings reinforced consensus views that the world’s second-largest economy will continue to cool in the next few quarters.

Facing the weakest economic growth since the global financial crisis, Chinese policymakers are fast-tracking big road and rail projects, pushing banks to increase lending, and cutting taxes to ease strains on businesses. And more action is likely on the way.

Manufacturing has been supported by resilient exports as firms rush to ship goods to the United States ahead of higher tariff rates, amid persistent trade tensions between the world’s largest economies.

Investors are hoping for some progress when U.S. President Donald Trump and Chinese leader Xi Jinping meet later this month.

But the bigger worry for China lies at home, with domestic consumption starting to slow amid mounting household debt, while the real estate sector—a major driver—continues to cool.

Retail sales rose 8.6 percent in October from a year earlier, the National Bureau of Statistics (NBS) said, the slowest since May. Analysts had expected only a marginal dip from 9.2 percent in September.

A slump in auto sales has put the world’s biggest car market on the verge of its first annual contraction since at least 1990, while garment sales are growing at the weakest pace in over two years, pointing to faltering consumer confidence.

“There are myriad reasons for this step-down in consumer spending: the increase in mortgage debt is eating into disposable income, investment returns are falling, and the closure of many online lenders is cutting off a key source of consumer finance,” Everbright Sun Hung Kai said in a note.

Beijing is hoping to offset the drag by cutting import tariffs and income tax—it is even reportedly considering making mortgage payments tax-exempt—but those policies may not have much impact, Everbright said.

Slower retail sales were due to seasonal factors, Liu Aihua, a spokeswoman at the statistics bureau, told reporters.

However, analysts noted sales growth has been on a downward trajectory since March.

“Almost all categories in retail sales disappointed in October. We think the government’s fiscal stimulus came in too late, and people now tend to save more and spend less,” Iris Pang, Greater China economist at ING bank in Hong Kong.

“We expect the effect of the personal income tax cut will start to be felt in November, when retail sales may gain some traction.”

China in October raised the threshold for collecting individual income tax to 5,000 yuan per month from 3,500 yuan in the hopes of boosting consumption.

One of the few positive surprises was industrial output, which rose 5.9 percent. It had been expected to ease slightly from September’s 5.8 percent.

But analysts warned the rebound may be short-lived, saying exports could fall sharply if the U.S. proceeds with a sharp hike in duties on Chinese goods from January. Surveys show factory export orders have been shrinking for months.

China watchers were also heartened by signs of improvement in overall investment growth, which hit a record low earlier this year as regulators reined in local government spending.

Fixed-asset investment growth quickened more than expected to 5.7 percent in January-October. Analysts had expected only a slight tick up to 5.5 percent.

Infrastructure spending, a major growth lever that Chinese policymakers have pulled in past slowdowns, also showed some signs of life. It picked up to 3.7 percent in the first 10 months of the year from 3.3 percent previously.

China has pledged to ramp up infrastructure investment further to spur demand. But even if projects get funding swiftly, economists note it will take some time before the new spending works its way through the economy and growth starts to stabilize.