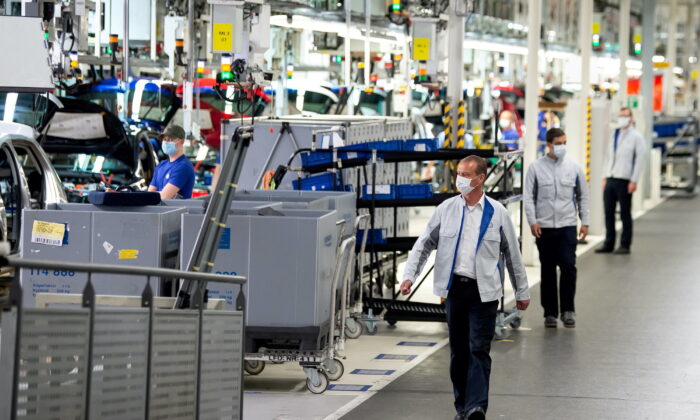 BERLIN—Weaker demand from abroad drove a much bigger than expected drop in German industrial orders, including cars, in October, data showed on Monday, further clouding the growth outlook for manufacturers in Europe’s largest economy.

A pandemic-related scarcity of microchips and other electronic components has caused massive supply bottlenecks and production problems in Germany’s mighty automobile industry and other important sectors of the economy.

Orders for goods ‘Made in Germany’ dropped 6.9 percent on the month in seasonally adjusted terms after a revised rise of 1.8 percent in September and a plunge of 8.8 percent in August, figures from the Federal Statistics Office showed.

A Reuters poll of analysts had pointed to a smaller decline of 0.5 percent on the month in October.

“After incoming orders climbed to an all-time high in mid-2021, the index has lost more than 16 points in recent months,” the economy ministry said, adding that the second sharp decline within three months put a further damper on the economic outlook.

Excluding distorting factors from bookings for big ticket items such as planes, industrial orders were still down 1.8 percent, the data showed.

The drop was driven by a decline in foreign orders of more than 13 percent on the month, with demand from countries outside the euro zone such as China particularly weak. Orders from domestic clients rose 3.4 percent.

“New lockdowns in Asia are slowing industry in Germany,” VP Bank analyst Thomas Gitzel said. He added that the current wave of coronavirus infections across the globe was putting a renewed burden on the world economy.

The weak orders data suggest that manufacturing will hamper overall economic growth in the coming months, with analysts expecting stagnation at best in the final quarter of this year.