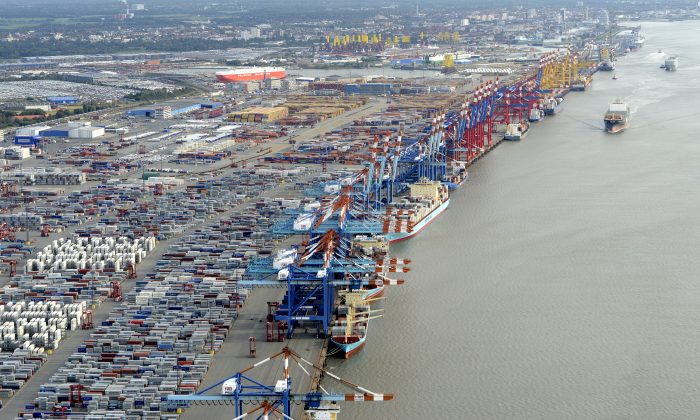 Shipping terminals and containers in the harbour of the northern German of Bremerhaven on the banks of the river Elbe, late Oct. 8, 2012. REUTERS/Fabian Bimmer
Economies

BERLIN—German exports unexpectedly fell in August, data showed on Oct. 9, in a fresh sign that manufacturers in Europe’s largest economy shifted into a lower gear over the summer months.

The Federal Statistics Office said seasonally adjusted exports edged down by 0.1 percent on the month, missing a Reuters forecast of a 0.3 percent rise. Imports dropped by 2.7 percent, undershooting a predicted 0.2 percent fall.

ING economist Carsten Brzeski blamed the low trade volumes over the summer months on a general weakening of global manufacturing activity and a temporary blip in domestic demand.

“The traditional German growth engine is stuttering once again,” Brzeski said, in reference to exports. “Luckily, the German economy is no longer running on one or two cylinders but still has solid domestic demand to lean on. At least for now.”

The seasonally adjusted trade surplus widened to 18.3 billion euros ($21.0 billion) in August from 15.9 billion in the previous month, the data showed.

The trade figures chimed with data released on Oct. 8 that showed industrial output edging down unexpectedly in August, suggesting the German economy lost steam in the third quarter.

Volker Treier from the DIHK chambers of industry and commerce said the weak data meant that he would probably have to cut his forecast for 5 percent export growth this year.

“Exports are stagnating. And the worst is probably yet to come. In particular, the trade conflict between China and the United States will leave its mark in the coming 12 months,” he said. “German companies are too interconnected in the global economy, especially with these two countries, to be free from it.”

Economists are taking an increasingly pessimistic view of the German economy, with the top German institutes last month revising down their 2018 growth forecast and warning that an escalation of trade friction involving the United States could cause a major recession in Germany and Europe.

A source has also told Reuters that the government will revise down its growth forecasts for this year and next. The government is expected to announce its updated growth projections on Oct. 11.

Economy Minister Peter Altmaier said last month the economy would grow by around 2.0 percent this year, plus or minus 0.1 percent. Last year, Germany’s gross domestic product expanded by a calendar-adjusted 2.5 percent, the strongest rate since 2011.