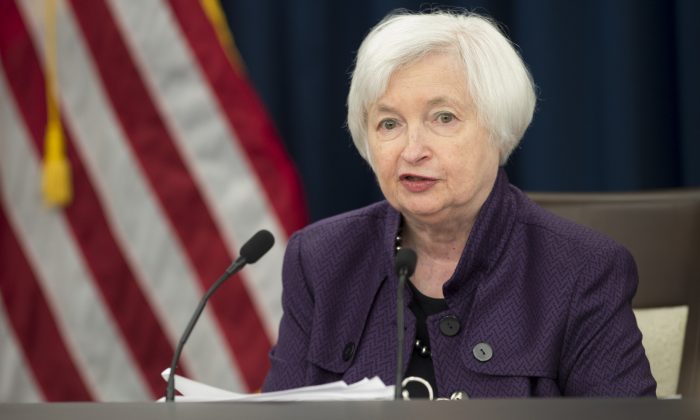 The Fed held its key rate unchanged at 0.25 to 0.50 percent on Wednesday, Sept. 21. While the U.S. central bank is pleased with the economy’s progress and Fed chair Janet Yellen said the case for a rate hike strengthened, the estimate of the Fed’s key rate in the longer run—the neutral rate—fell.

The neutral rate is something of a theoretical concept. It represents the equilibrium interest rate (without need for add-ons to compensate for various risks) that exists in a “perfect” economy—one that is operating at its full potential without needing a boost or a cooling off from monetary policy.

The Fed’s Sept. 21 economic projections showed that its estimate of the neutral rate came down to 2.875 percent.

BMO senior economist Michael Gregory points out that the first time the Fed published its neutral rate estimate, in January 2012, it was 4.25 percent. In just under five years, that rate has been cut by nearly 1.5 percent.

Yellen noted that the neutral rate is “quite low by historical standards” in her press conference.

Yellen didn’t elaborate on the decline in U.S. business investment other than saying it is broad-based and not limited to the energy sector, which has seen drilling activity slow down since the sharp drop in oil prices. But in recent speeches, Bank of Canada officials discussed the connection between slumping business investment and the neutral rate and the problems that causes.

“In a lower-growth environment, businesses invest less and therefore have lower financing needs. This drives down the neutral rate, since a lower level of interest rates is required to equate savings with investment,” said Bank of Canada Senior Deputy Governor Carolyn Wilkins in London, England on Sept. 14.

The BoC estimates the neutral rate in Canada to be 1.25 percent now, which is down from about 3 percent in the early 2000s.

One adverse effect of low interest rates is that it encourages households to take on additional debt such. Canadian households are among the most indebted in the world, owing about $1.65 for ever dollar of disposable income.

Lower neutral rates pressure banks’ business models as net interest margins—the difference between the interest earned on loans made and the interest paid out for funding obtained—are squeezed.

“In the United States, for example, net interest margins narrowed by about 20 percent between 2010 and 2015,” Wilkins said. This could force banks to move away from the traditional deposit-taking model and into riskier activities, although banks have stronger capital positions than before the financial crisis.

Lower Speed Limit for the Economy

Bank of Canada Governor Stephen Poloz said in a speech in Quebec City on Sept. 20 that the biggest factor pushing down the neutral rate is a steady decline in the economy’s potential growth rate. And lower business investment, impacted by an environment of global uncertainty, reduces an economy’s potential to grow.

“If we are aging demographically, we need higher productivity to maintain growth in the economic pie, not lower productivity, and it seems the trend is going in the wrong direction,” Gregory said.

“One of the reasons why potential growth has come down is because the growth of the capital stock has not been as rapid as it’s been in other [business] cycles,” Gregory said. Reduced capital spending is a global phenomenon, not just specific to Canada and the U.S., he added.

All Kinds of Uncertainty

Canadian and U.S. corporations are sitting on stockpiles of cash funded by debt issuance since interest rates have been so low for so long. But they’re shying away from capital spending in favor of paying dividends and buying back stock, said BMO senior economist Robert Kavcic in a Sept. 16 note.

Rife with uncertainty in a low-growth environment, businesses may still have elevated expectations for returns on capital investment. If that is the case, Poloz says they’ll be unlikely to invest any time soon and the economy won’t see the kind of growth, productivity, and job creation it needs.

“The global economy has become more important than ever for U.S. businesses,” Gregory said. But U.S. companies are less able to raise prices should wages rise as the labor market heats up.

Policy uncertainty in the wake of political uncertainty is not good for business either. The U.S. election poses a threat to trade agreements, which would deal a potentially heavy blow to economic growth.