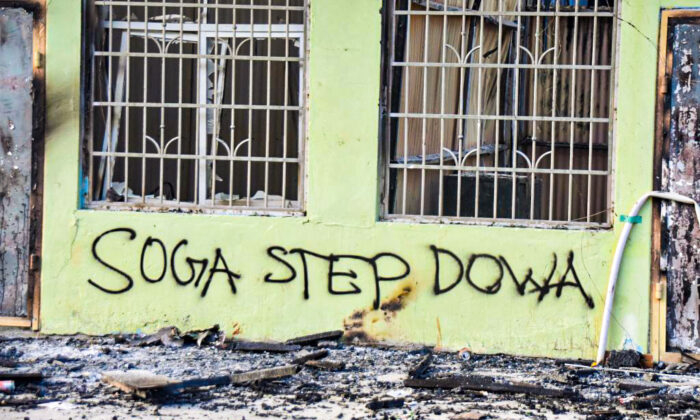 Matthew Wale, the prominent opposition party leader in the Solomon Islands, claims to have warned Australian officials in 2021 that Beijing and the Sogavare government were working on a military deal that would allow the People’s Liberation Army to base assets in the region.

The deal, which surprised officials last week, was revealed after it began circulating online on March 24. It could open the door for Chinese security personnel, including police, soldiers, weaponry, and naval ships, to be stationed in the Pacific nation—based just 1,700 kilometers from the northern Australian city of Cairns.

“I told the Australian high commissioner that there were discussions on something that would lead to a security agreement that may be open to security assets and shore base facilities was in the making,” Wale told The Australian. “I was already at that time aware [of the plan] because I was informed by somebody who was in those discussions.”

He said he spoke to the Australian High Commissioner around August last year when the “exploratory discussions” took place between Beijing and Sogavare.

Prime Minister Scott Morrison said the federal government was “aware of the risks right across the Pacific.”

“This is why we provided support to the major infrastructure projects across the region, including the Solomons,” Morrison told reporters on March 28.

Australia’s main opposition, the Labor Party, has criticized the Morrison government for supposed cuts to aid going to Pacific nations and a lack of engagement with leaders in the region.

“We wouldn’t have cut funding to aid, which occurred from Labor’s projections when there was a change of government. That was short-sighted,” Labor leader Anthony Albanese told reporters on March 26. “It was aimed again at sending a message domestically without putting our national interest first.”

Albanese will meet with security officials, noting that the developments in the Pacific were of grave concern.

However, Morrison has refuted the claims, saying that assistance to the region had increased by 50 percent.

“While they [Labor governments] were chasing votes for the U.N. Security Council, throwing money in continents far away from our region, we decided to increase our focus and draw together, and this started under Foreign Minister Bishop, drawing together our overseas development assistance from around the world and focusing it on the Pacific region because we saw that as our first responsibility,” he told reporters on March 26.

Yet Cleo Paskal, an associate fellow of the Asia-Pacific Programme at Chatham House, said it was unwise to try to outspend the Chinese Communist Party’s (CCP) influence-building machine.

“The difference is they’ve got a guy in power [Solomon Islands’ Prime Minister Manasseh Sogavare] who backs them. Sogavare has never been pro-Washington, pro-democracy, or pro-accountability and transparency.”

Paskal has said that with backing from Beijing, Sogavare could attempt to solidify his hold on power and that Australia and New Zealand should try to reinvigorate the democratic process in the country—via the 2000 Townsville Peace Agreement—to put more pressure on Sogavare.

“Put out the steps that the various provinces, including Malaita, agreed to. There’s a whole series of things that have already been negotiated—everybody signed on, including the government under Sogavare,” Paskal said.

The 2000 agreement ended violence between rival militia groups and laid the foundation for the current government.

“Sogavare and his members of Parliament are given a choice: You can deal with China or you can deal with the rest of the world,” she said, noting that Sogavare and his Cabinet could lose privileges afforded to them in their relationship with Australia, which in turn could cause internal pressure to build on the embattled prime minister.

“We do not believe PRC security forces and their methods need to be exported,” the spokesperson said. “This would only fuel local, regional, and international concerns over Beijing’s unilateral expansion of its internal security apparatus to the Pacific.”