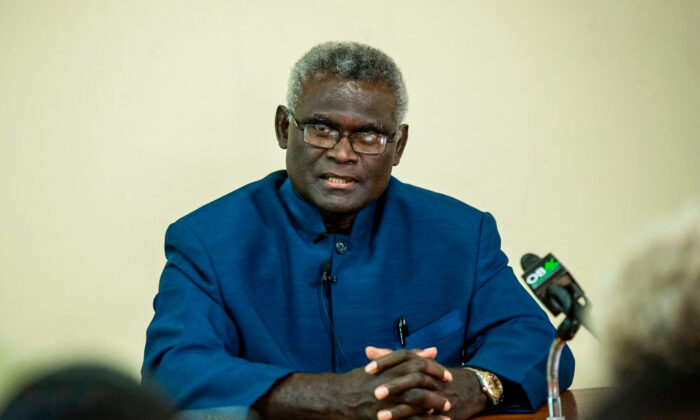 To regain ascendancy over Beijing in the Solomon Islands, Australia must tackle the increasing assertiveness of Prime Minister Manasseh Sogavare who could engineer a “false flag” event to tighten control over the Solomon Islands after his government entered a secret security deal with Beijing, according to a South Pacific expert.

The agreement, if carried through, could pave the way for Chinese troops to be stationed on the Island and establish a new forward position for Beijing to assert control over the Indo-Pacific. The Solomons was the site of the Battle of Guadalcanal during World War II and fought over tooth and nail because of its influence over the sea lanes in the region.

Cleo Paskal, an associate fellow of the Asia-Pacific Programme at Chatham House, said the leaked security deal was unsurprising and was the latest “piece” in Beijing’s building hegemony in the South Pacific.

However, she warned that Prime Minister Sogavare could seize the chance to create a “security situation”—or an excuse—to bring in Chinese personnel and security forces to pacify the country and delay elections, which the incumbent prime minister could possibly lose.

Tensions in the Solomons has been ongoing after violent protests erupted in late November last year in the capital, Honiara, which saw three deaths and the Chinatown precinct razed.

While ethnic tensions and dissatisfaction with the performance of the national government were critical factors—including blatant bribery to pro-Beijing politicians—Sogavare’s relations with the Chinese Communist Party (CCP) was also a flashpoint.

“(Sogavare could say,) ‘We need outside help to come and create stability in the country, and our friends China will come and do it,’” Paskal told The Epoch Times. “And that’s when they arrest the leaders, the Malaitan leaders, and God forbid what happens to them in detention.”

“It’s a predictable and very bad path for the people of the Solomon Islands. If I know it, the Australian intelligence and security community knows it,” Paskal said.

Additionally, the Solomon Islands must provide the facilities and border entry for “personnel and weaponry, intelligence, and information support.”

The deal also requires details of any assistance to be kept confidential unless both parties agree to release it publicly to the media. The Agreement is set for a five-year period and will be automatically renewed for another five years.

Successful implementation of the Agreement could also see Beijing station troops and weapons on the Islands—expanding the reach of the People’s Liberation Army beyond the South China Sea and just 1,700 kilometres from Australia’s northern city of Cairns.

The CCP already has plans to upgrade an airstrip and bridge on the Pacific nation of Kiribati, 3,000 kilometres southwest of Hawaii. Such a facility would make it possible to land larger military aircraft.

Prime Minister Scott Morrison told reporters on March 25 that he was not blindsided by the new Solomons’ deal and emphasised that Australia was still the leader in the Pacific region via its development assistance.

“There are others who may seek to pretend to influence and to seek to get some sort of foothold in the region,” he said. “And we’re very conscious of that, and that’s why we have been doing that work. We are not completely immune from the risks of that.”

Paskal said it was unwise to try to match Beijing’s influence machine—the current Australian government is facing criticism for not offering enough aid to the South Pacific—and instead called on Australia to put pressure on the Sogavare government to abide by the 2000 Townsville Peace Agreement, which ended ongoing violence in the region.

“Put out the steps that the various provinces, including Malaita, agreed to. There’s a whole series of things that have already been negotiated—everybody signed on, including the government under Sogavare,” she said.

Paskal said that the pressure could compel Sogavare’s ministers to intervene and stop things from “going too far.”