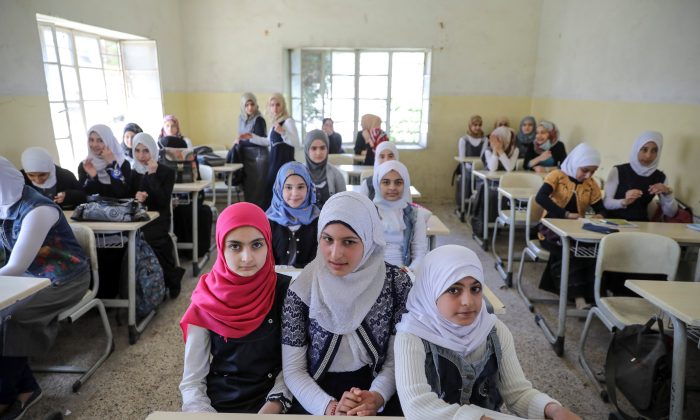 ‘We Want to Learn’: Iraqi Girls Back at School After Years Under ISIS

MOSUL, Iraq—Iraqi schoolgirl Manar Mahmoud is eager to resume classes after years of life under the ISIS terrorist group in Mosul, ignoring the nearby rattle of artillery fire.

The 13-year-old is back at her old school in the eastern part of the city, which Iraqi forces recaptured from the Sunni Muslim militants in January.

Within earshot, fighting is still raging. Just across the River Tigris, government troops, artillery and aircraft are attacking Islamic State’s last stronghold in the Old City in western Mosul.

But with the first new textbooks having arrived last week, teachers are wasting no time restarting classes. The girls have years of catching-up to do: most of them stopped going to school after the militants overran Mosul in June 2014.

“We want to learn, we do not want to be ignorant,” said Manar, assembling in the courtyard with other girls before classes.

The terrorists had forced the teachers to continue working but most parents pulled out their children, fearing they would be brainwashed with an extreme version of Sunni Islam.

“They were bad. They used to teach us about jihad (holy war), how to fight,” said Manar, wearing the school uniform with a white veil. “Our families prevented us from coming to school.”

With little interest in girls’ education, the militants quickly gave up, closing the school but not destroying it as they did with other public buildings.

They searched the library and teachers’ rooms, stripping them of valuables and removing books they disapproved of. A room full of Arabic-language teaching books survived—the terrorists had tried to shoot open the lock but gave up.

In another room are new books on subjects like English and Biology that were halted by ISIS.

The pupils are keen. “I’m very happy,” said 8-year old Sara Umar. “It’s better to go to school in the morning instead of staying at home.”

The biggest challenge is that the 150 girls enrolled at the school have different knowledge levels after missing almost three years of education.

“We have to put girls of different ages and knowledge in one class which creates many problems,” said the director of the school. “We are seeking more guidance from the ministry of education but not a single official has visited us yet.”

With ISIS just gone and the frontline a few blocks away, she and some other teachers asked not to be named, unsure what the future may bring.

The teachers all work for free as the government has not yet resumed paying salaries.

“The school has no running water and electricity,” said teacher Umm Mohammed, standing in front of her packed classroom.

“God willing, we will try to help the children and the pupils forget the suffering they have experienced.”