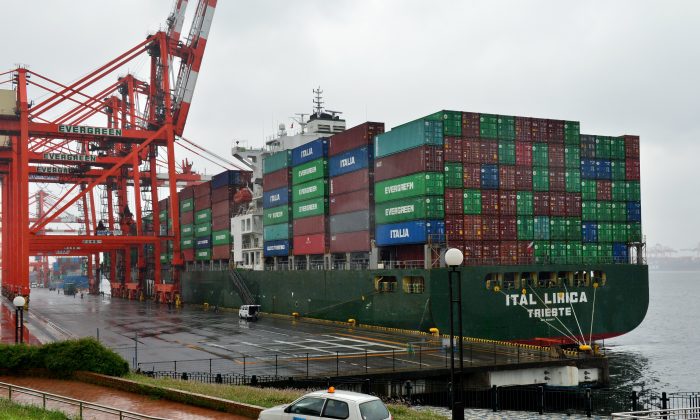 Shipping containers are loaded onto an international freighter at the international cargo terminal in Tokyo on May 21, 2014. (Yoshikazu Tsuno/AFP/Getty Images)
Business & Economy

We May Have Cinched TPP, but Is US Trade a Lost Cause?

President Barack Obama, with fast-track negotiating powers in his back pocket, managed to seal the biggest trade agreement of the World Trade Organization era this month.

The passage of fast-track, agreed by Congress in June to allow a straight up-or-down vote on trade deals, means the Trans-Pacific Partnership (TPP) agreement involving the United States and 11 other countries stands a strong chance of passage, at least in the United States.

The TPP encompasses 40 percent of global trade, links the United States with mostly Pacific countries including Singapore, Japan, and Australia, and is the biggest U.S. trade deal since at least 1995.

But large, much-trumpeted trade agreements like the TPP and the Transatlantic Trade and Investment Partnership (TTIP) with Europe belie a troubling trend: U.S. trade with the world, and the Pacific in particular, has been declining. Is it too late to turn the tide?

A Steady Decline in Trade

The U.S. share of the Asia-Pacific region’s imports declined about 43 percent from 2000 to 2010. Clawing that back would mean the need to export an additional $600 billion annually by 2020.

Meanwhile other countries have filled the gap. Part of the problem is that the United States has a history of being reluctant to enter into regional trade agreements.

The U.S. oldest trade agreement is with Israel, an accord that celebrated its 30th anniversary last month. Since then, the United States has signed just 14 regional trade agreements involving about 20 countries (18 more are currently being deliberated).

But during the same 30-year period, the world has seen 256 new trade agreements, as registered with the World Trade Organization (see chart), with 132 of them being implemented just in the last decade.

These regional trade agreements, when the United States is not involved, create barriers and constraints that have an effect on market opportunities and profits of U.S. companies. It is common to see tariffs that are five times higher in foreign markets than the U.S. average.

Another way to look at it is that the United States ranked 130 of 138 nations in terms of the amount of “tariffs faced” by the country’s exports—that is, U.S. companies face higher tariffs than nearly all our trading partners.

The battle lines on TPP—which still stands a chance of being blocked by Congress—seem to be the same as for most trade agreements. Special interest groups don’t like the potential undermining of U.S. regulations. Labor unions argue that jobs will be lost to low-salaried countries. And many argue that these agreements help only large corporations.

Is this really true? Not really. Barriers to exporting significantly hurt small and medium-sized U.S. enterprises as well. Such SMEs, with fewer than 500 employees, sales of less than $33.5 million and a small geographic footprint, represent 98 percent of U.S. exporters. Exporting is their best bet for growth.

Why doesn’t the U.S. government do more? Perhaps it is hubris.

The United States is still the world’s largest exporter, with $2.35 trillion sent annually around the world. Some 38 million Americans have jobs because of trade. So even with the decline in overall manufacturing output since 1979, the United States is doing well globally. And some of the decline has been offset by service exports ($710 billion).

While the United States is consistently ranked as one of the most competitive of the world’s 200 countries and, by most accounts, is also perceived as the leader in foreign policy and world affairs, the country has not proactively engaged in worldwide trade agreements at the pace of other nations. This hurts large corporations and small businesses alike.

In looking at the chart, covering 1960 to 2015, it’s pretty easy to see that the proliferation of trade agreements follows the same rate as the increase in cross-border trade. Meanwhile, world production has not increased as much. We trade more across borders than we make relative to the past.

Are We In or Out?

Based on my research, this “global supply chain effect” will continue. Just to stay competitive, companies’ global supply chains will have to become 43 percent more global by 2023. A primary reason is to keep up with the in- and out-flows from the Asia-Pacific region.

Can the United States keep up? With the United States engaging in fewer regional trade agreements than much of the rest of the world, it stands to reason that U.S. companies will continue to lose out. Research that I have done backs this up. A lack of trade agreements adds to the negative “country effect”—that is, how much residing in a specific locale affects business performance. Results show that about 6 percent of the performance of companies depends on such country effects.

Either the United States is in the “in group” or it has to face the “out group” consequences. Naturally, trade among countries in a trade agreement increases, while trade with countries outside it stays flat or may even decline.

These country effects have serious consequences, particularly for consumer products, which are often sold like generic commodities with low profit margins. Regional trade agreements, if negotiated properly and timely signed, can help bring down costs and increase profit margins, especially for SMEs. The net gain is an increased positive country effects vis-à-vis competitors.

So let’s hope Congress doesn’t delay in approving TPP. But let’s also hope that the next president takes advantage of the six-year renewal of fast-track and picks up the pace of negotiating new trade deals so America’s workers and small businesses don’t get left behind.

Tomas Hult is Byington endowed chair and professor of international business at Michigan State University. This article was previously published on TheConversation.com