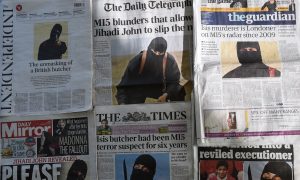 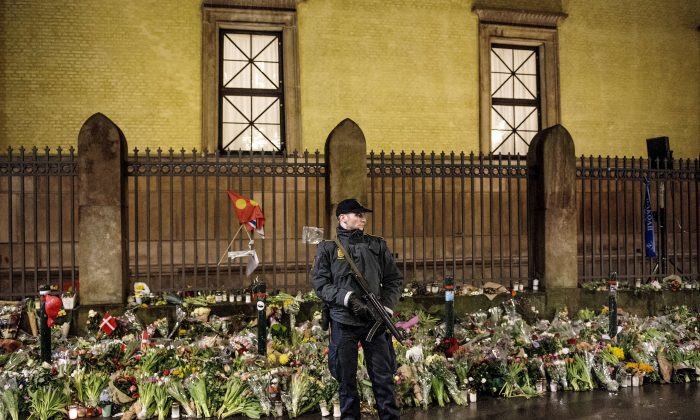 An armed police officer guards outside the Jewish synagogue during a memorial service in Copenhagen on Feb. 24, 2015, for Dan Uzan and Finn Noergaard, who were killed during the twin terrorist attacks the previous week in Copenhagen. (Bax Lindhardt/AFP/Getty Images)
Opinion

We Lost the Propaganda War: From Twitter to Denmark

“People are radicalizing in all 50 states,” said FBI Director James Comey at a meeting of the National Association of Attorney Generals in Washington, D.C.

At a congressional hearing titled “Terrorism and Homeland Security,” the FBI’s Michael Steinbach, the assistant director of counterterrorism, stated, “We estimate upward of 150 Americans have traveled or attempted to travel to Syria to join extremist groups.” He added, “That number is small compared to European travelers.”

Yet the FBI doesn’t have a “pattern” on the radicalization of Westerners. Why?

The FBI should try defining the allure of apocalyptic jihad. Then answer the question: Why do people join fanatical groups? Does the pattern boil down to human nature or the human condition?

The FBI does have a demographic profile: Young men in their early 20s, Muslim by one degree of separation. But in the U.K. as many as 60 young British women have fled to join the ISIS (Islamic State in Syria and Iraq), according to the Guardian newspaper.

Part of the reason for the widespread radicalization has been the ISIS’s ability to use social media sites, such as Twitter, Facebook, and Google’s YouTube, to get their word out in visually powerful ways.

Last week, Twitter announced that it has shutdown more than 2,000 jihadist accounts since last fall. ISIS countered, asking its followers to bring bodily harm to Twitter’s executive management and employees throughout the world.

But that is not enough, according to a Brookings Institute paper, “The ISIS Twitter Census: Defining and Describing the Population of ISIS Supporters on Twitter.”

Key findings include that there are more than 46,000 ISIS followers. One-fifth of the followers choose English as their primary language. The average ISIS-supporting account has 1,000 followers. And “small group of hyperactive users, numbering between 500 and 2,000 accounts” tweet in high volume bursts.

“As a communications tool, the Internet remains a critical node for terror groups to exploit,” the FBI’s Steinbach agreed.

The Digital Age of mobility and social media platforms has empowered ISIS to recruit thousands of ordinary citizens outside the war zones of Iraq, Syria, Libya, and now Yemen, and to reject our rule of law and accept their zealot laws. Most of the recruits are on the fringes of society, disconnected, embittered. Yet many are from educated, upper-middle-class families. Perhaps that is the pattern gap the FBI is wrestling with.

Confirming the identity of “Jihadi John” punched home that reality. He was a university graduate from London.

For all of the counterterrorism and counterinsurgency programs the United States intelligence community has developed the past two decades, we lack a counternarrative to the ISIS’s dark allure, the savage purification of the old guard by blood.

Last week at the Council of Foreign Relations in New York, James R. Clapper, the director of National Intelligence, said, “One of the things I think we have awakened to is the need for a very robust effort at the counter narrative, and this is particularly so with ISIL[ISIS], since they are very slick, very sophisticated at appealing to a fairly large segment of people, as they will in these [Syrian] refugee camps.”

The West appears to be a long way from developing the counternarrative.

The aura of the ISIS has become a seductive beacon for Westerners. Most of the citizens are Muslims, but hundreds more are converts who have flocked to embrace ISIS’s apocalyptic jihad. In the last six months, Muslims in Australia, Canada, England, France, and Bangladesh have carried out attacks on “soft” targets—civilians—while many plans in other nations have been foiled.

The arrests of three radicalized youths in Brooklyn should cause heartburn for federal authorities. They were discovered only after the New York City police mined social media sites to intercept the young men from traveling to Syria, where they would have been trained by ISIS and sent back to the United States to attack high-profile targets.

In February, Denmark joined the fraternity of target nations. A radicalized, Danish-born Muslim citizen tried to assassinate Lars Vilks, a Swedish Muhammad cartoonist, at a Copenhagen cafe during a panel discussion on Art, Blasphemy and the Freedom of Expression.

Like many attacks before it, terrorists have only partially succeeded in killing their intended targets.

The 2013 Boston Marathon bombings killed only three people at the sports event, while maiming dozens of spectators. Certainly, the Tsarnaev brothers expected to kill more than three with two bombs going off 12 seconds apart, two football fields away from each other. Although Norwegian super lone wolf Anders Brevik produced maximum terror with his dual attacks in Oslo in the summer of 2011, he failed to slay his ultimate target—former Prime Minister Gro Harlem Bruntland. She had left the children’s camp earlier that day.

Armed with a Finnish-made M95 assault rifle, the 22-year-old, Islamic gunman Omar El-Hussein opened fire into the Krudttoenden Cafe. For all the rounds—more than 50—sprayed into the cafe, El-Hussein missed his target. The assassin did, however, kill Danish filmmaker Finn Noergaard and injured three policemen. His escape allowed him to kill the volunteer guard at the synagogue later that night, before dying in a shootout with the police.

In the latest development, Danish police arrested a third suspect, believed to be the brother to El-Hussein, according to The Local, a Danish newspaper.

How can the West stop the flow of damaging images that “turn on” young people to take up arms against their own nations or join the Islamic State in Iraq and Syria?

Martin Lidegaard, the minister of foreign affairs in Denmark, wrote via email, “The Danish government recently launched an anti-radicalization plan with a range of social initiatives to prevent violent extremism and last week we launched new initiatives to combat terror, primarily focusing on improved surveillance technologies, but also how to prevent the spread of extremist ideas in Danish prisons and upgraded measures to counter extremist propaganda—both in Denmark and in other parts of the world.”

That’s one solution. But it’s a steep hill to climb to diminish the allure that ISIS has cultivated. Unlike the autogenocide committed by the Khmer Rouge in Cambodia, ISIS makes no attempt to conceal its heinous acts and crimes. On the contrary, it bathes in it. It leverages social media and international news feeds as channels to get its messages out. With each death or kidnapping broadcast to the world, ISIS entices more young people to consider joining its crusade.

For all of the dismissive comments emanating out of the White House, ISIS has won the information war. Its territory now extends from Northern Africa to Afghanistan. But its digital reach is global.

If the West is to narrowly define the enemy, then it needs to call ISIS by the name it gives itself. From President Obama to European leaders, they must move on from the folly of not calling out ISIS and label it as a black sect of Islam. There should be no qualms about this. Christianity has been hijacked before by death cults in Jim Jones Peoples Temple and David Koresh of the Branch Davidians.

Denmark’s Foreign Minister Martin Lidegaard agrees, “I believe the attraction to global jihad is fuelled by large social, political, and economic problems in the Middle East and North Africa in particular. This is the root of the problem, which we have to address. That said, it’s clear that terrorist organizations are very active and effective in using social media as their propaganda channels, and there is a clear need to step up against this. This is on our agenda and the agenda of the EU countries.”

The Khmer Rouge operated with impunity as a result of a global news blackout in the 1970s. Today, we need to impose a media blackout on ISIS to neutralize its recruiting power.