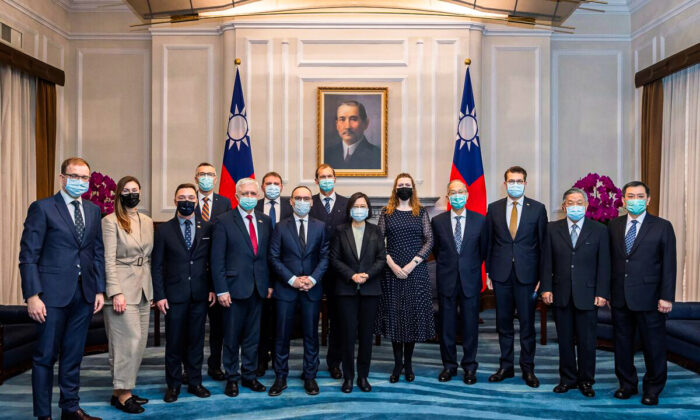 Taiwanese President Tsai Ing-wen hosted members of a Baltic delegation in Taipei on Nov. 29, in a sign of deepening cooperation between European Union nations and Taiwan against Beijing’s aggression.

Visiting lawmakers from Lithuania, Latvia, and Estonia landed in Taiwan on Nov. 28 to attend a democracy forum, which will be held this week and hosted by Taiwan’s Ministry of Foreign Affairs.

This is the first joint delegation to Taiwan from all three Baltic states, said Tsai at the Presidential Office in Taipei on Monday morning, which she called “a meaningful trip.”

During the meeting, the lawmakers paid respect to the “perseverance and wisdom” of the Taiwanese people. The democratic island defended itself against authoritarianism and disinformation from its biggest neighbor across the Strait, said Matas Maldeikis, head of the Lithuanian delegation and chair of the Lithuanian Parliament’s Taiwan Friendship Group.

“We are here to express our solidarity with you,” said the chairman, adding that the two countries must strengthen their ties to preserve freedom and rules-based international order.

The visit came amid a spat between Beijing and Vilnius about the latter’s decision to allow self-ruled Taiwan to open a de facto embassy in Lithuania’s capital city, which would be called Taiwanese Representative Office.

Lithuania also plans to open a representative office in Taiwan.

The diplomatic breakthrough brushed aside Beijing’s vehement opposition as the Chinese regime regards Taiwan as part of its territory to be united with mainland China and has tried to isolate Taipei on the world stage.

Last week, China downgraded diplomatic ties with Lithuania and temporarily suspended consular services in a show of anger and retaliation.

Tsai told the lawmakers that Taiwan and the Baltic nations—once part of the Soviet Union—share similar experiences of breaking free from authoritarian rule and fighting for freedom.

“The democracy we enjoy today was hard-earned,” Tsai said. “This is something we all understand most profoundly.”

Taipei hopes for further collaboration and exchanges with Latvia and Estonia, said the president.

Tsai also thanked Lithuania for donating two batches of then badly needed vaccines to Taiwan earlier this year. The Baltic state announced in September that it would donate over 230,000 additional doses of the AstraZeneca vaccine to Taiwan, on top of the first 20,000 doses delivered since June.

Lithuania is the first EU member state to offer pandemic aid to Taiwan, which was battling a strong COVID-19 surge in June. Slovakia, the Czech Republic, and Poland followed Lithuania’s lead with additional aid.

Maldeikis said he hopes to expand the partnership between the two countries and “contribute to a closer relationship [between] Taiwan and the whole European Union block.”

Currently, no EU member state has official ties with Taiwan.

In September, multinational lawmakers called for international solidarity with Lithuania and Taiwan against coercion from Beijing.

“By bullying Lithuania, Beijing hopes to send a warning to democracies across the world,” said Irish Sen. Malcolm Byrne in a video released by the Inter-Parliamentary Alliance on China.