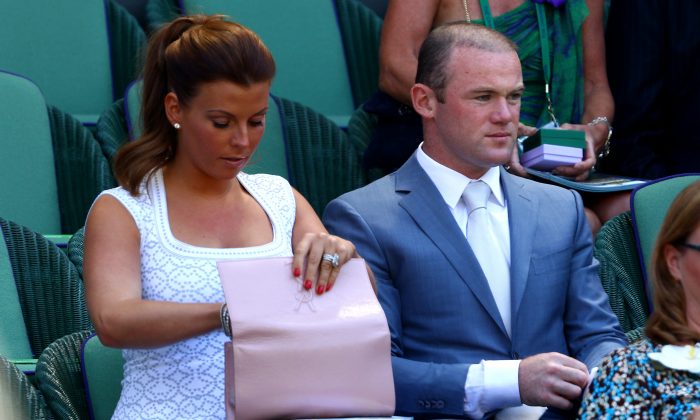 Coleen Rooney with her husband Wayne in a file photo. (Getty)
Sports

Wayne Rooney’s wife Coleen Rooney is in Brazil cheering on her husband although England will not make it past the first round of the World Cup.

Rooney was pictured in the stands during England’s game against Uruguay earlier this week, along with her and Wayne’s four-year-old son Kai.

The pair were left disappointed along with millions of other fans–Kai couldn’t hold back tears while Coleen buried her head in her hands at one point.

The only consolation was that Rooney scored a goal for England, but it wasn’t enough as Luis Suarez scored two for Uruguay.

Though upset over the loss Coleen still took to Twitter to congratulate her husband.

“Gutted with the score, but so pleased @WayneRooney scored and his boys were here to see it!” she said.

People were not exactly pleased with another of Coleen’s messages of support for Wayne, which she posted on Father’s Day following England’s opening loss to Italy.

“What’s there to be proud of?” asked one.

Coleen, 28, is a television presenter, columnist, and celebrity product endorser.

She’s from Liverpool, Merseyside and currently lives in Prestbury, Cheshire.

She and Wayne also have another son, Klay Anthony Rooney, whom she gave birth to in May 2013.

Coleen told the Daily Star that she wanted to give her boys the opportunity to watch their father at the world’s biggest football tournament.

“I don’t want the boys to grow up and say: ‘How come you never took us to watch my dad play in the World Cup?”’

The family was not allowed to stay with Wayne at the team hotel, instead checking into one on Ipanema beach in Rio.