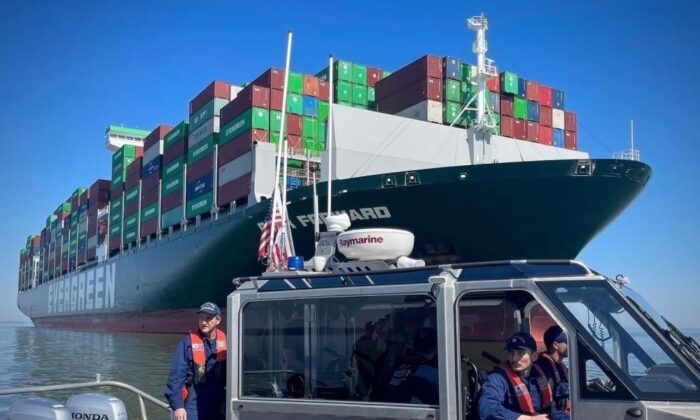 The fully loaded cargo ship that ran aground in the Chesapeake Bay as it left Baltimore nearly two weeks ago is still stuck, and folks who work in Maryland’s seafood industry are worried about the impact it is having on marine life.

The grounded ship, called the Ever Forward, is owned by Evergreen Marine Corp., the same company that blocked the Suez Canal with a stuck ship last year.

The Ever Forward has not moved since March 13. It was headed to Norfolk, Virginia, and ran aground in water 24-feet deep, the U.S. Coast Guard said. A salvage company began dredging—digging around the ship—on March 20, and is expected to continue until next week.

“At this time, the grounded vessel is stable, poses no pollution threat, and is not impacting operations in the Port of Baltimore. The Coast Guard is continuing to enforce a safety zone to ensure the safety of responders and protect the marine environment from potential hazards associated with salvage operations,” Coast Guard Petty Officer 3rd Class Emily Velez told The Epoch Times.

Evergreen says two dredging teams are working to remove mud around the vessel in an effort to increase the ship’s buoyancy. The company provided the Epoch Times with the following statement: “Evergreen is closely monitoring the progress of this excavation and working with the salvor, Donjon Smit, to assess the additional measures to be taken to further aid flotation once the current goals of this dredging effort have been attained. The progress gained will also guide tugboat deployment to be used for the next phase of the rescue operation.”

Watermen who make their living crabbing, fishing, and harvesting oysters on the Chesapeake Bay say the ship and the dredging are destroying marine habitat.

“This ship is 1,096 feet long and 145 feet wide. It draws 47 feet of water, which means it needs 47 feet to float. It’s in 24 feet of water right now which means 23 feet is in the mud,” Merchant Marine Captain Robert Newberry, chairman of the Delmarva Fisheries Association told The Epoch Times.

But it is not just mud. The Ever Forward is about 100 yards from an oyster bar, Newberry says, and that means the ship is stuck in “oyster bottom,” a classification that will require repair to the area after the ship is moved. Newberry describes oyster bottom as gooey and the consistency of pudding. It is one of the best places for Blue Crabs to hibernate.

“When you have, for instance, mollusks like oysters or mussels, when they get covered with silt, that’s like someone choking the life out of you. They can’t breathe, they can’t eat, they die,” Newberry said. It’s the same for crabs. “When the plume of all this sediment settles, if it’s over 3 inches thick it’s going to suffocate whatsoever is underneath the mud. The effect could be killing crabs a mile either side of the tide line where this ship is.”

“They’re going to have to pay. There’s going to be a lot of damage and a lot of people that are working in that area are not going to be able to go back and work because of the destruction at the bottom. It is it going to affect crabbing, fishing, and oystering.”

Evergreen Marine Corp. is based in Taipei City, Taiwan. It owns more than 150 container ships.

The Ever Forward, currently loaded with 4,964 containers, has a home port in Hong Kong.