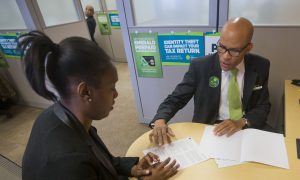 Watchdog: IRS Does Business With Tax Delinquents Despite Ban

WASHINGTON — The IRS is doing business with tax delinquent contractors despite a federal law that bars the tax agency from awarding contracts to these businesses, a government watchdog said Wednesday.

The IRS awarded contracts to 17 businesses in 2012 and 2013 that had delinquent tax debts, according to a report by the Treasury inspector general for tax administration.

“Awarding contracts to corporations with federal tax debt conveys a conflicting message in relation to the IRS’s mission to ensure compliance with the tax laws,” the report said.

The IRS said in a statement that the contracts represented only a small fraction of the more than 20,000 contracts the agency awarded in 2012 and 2013. The statement said nine of the contractors have since paid their back taxes or enrolled in a payment plan.

The IRS has the unique ability to check whether contractors owe back taxes.

The report did not name the contractors because the IRS is barred by federal law from disclosing information about taxpayers.

When soliciting contracts, the IRS is supposed to require contractors to certify that they don’t owe delinquent taxes. But the agency wasn’t doing that, either, the report said.

And despite the 2012 law, the IRS hadn’t even determined what constitutes an unpaid tax liability, for the purposes of barring a contractor, the report said.

The inspector general’s office identified tax delinquent companies as those that had exhausted their appeals and were not enrolled in a payment plan.

Related Coverage
Why I Voted to Maintain the Property Tax

Of the 57 contracts awarded to tax delinquent businesses, 25 were new contracts valued at about $900,000. The remaining 32 awards were modifications to existing contracts, the report said. Those modifications were worth about $18 million.

In a written response to the report, the IRS said the ban on doing business with tax delinquents didn’t apply to modifications made to existing contracts. The inspector general’s office disputed this claim, saying the modifications called for new work that was covered under the law.

“The IRS remains deeply concerned about awarding contracts to delinquent corporations. We have taken a number of corrective steps to make improvements in this area, and we will continue to do more,” the IRS said in its statement. “Going forward, the IRS will continue focusing on this area and applying appropriate checks and protections to ensure companies receiving awards meet their tax obligations.”