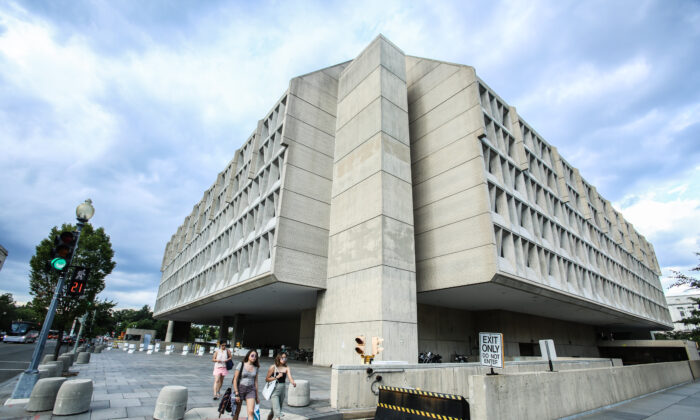 The Department of Health and Human Services building in Washington on Aug. 14, 2018. (Samira Bouaou/The Epoch Times)
By Bowen Xiao

A government watchdog has identified major concerns relating to health insurers exaggerating how sick their Medicare patients were, resulting in nearly $7 billion in improper payments, according to a report released on Dec. 12.

The study, released by the U.S. Health and Human Services (HHS) Office of Inspector General (OIG), stated that Medicare Advantage plans sold to seniors and disabled people by health insurers received an estimated $6.7 billion in payments during the year of 2017.

The payments were made after insurers added diagnoses to patients’ files that weren’t supported by their medical records.

Inspectors found that Medicare Advantage insurers had added diagnoses for diabetes, heart disease, and other conditions in 99.3 percent of chart reviews of patient information, even though they didn’t appear in records from doctors, hospitals, or other medical providers. Insurers deleted incorrect diagnoses less than 1 percent of the time, they found.

The authors found that MAOs “almost always used chart reviews as a tool to add, rather than to delete, diagnoses—over 99 percent of chart reviews in our review added diagnoses,” according to a summary of the report.

“Although limited to a small number of beneficiaries, almost half of MAOs reviewed had payments from unlinked chart reviews where there was not a single record of a service being provided to the beneficiary in all of 2016,” the summary continued.

The additional diagnoses boosted government payments to insurers by an estimated $6.9 billion, while the deleted information trimmed payouts by nearly $200 million, producing a net benefit of $6.7 billion for the companies.

“We could not see any services with the diagnosis and that raised a number of concerns,” Linda Ragone, a regional inspector general in Philadelphia and co-author of the report, told Reuters. “There is a vulnerability here that needs to be addressed.”

The report highlighted a group of 4,616 Medicare Advantage enrollees for whom insurers added a diagnosis that resulted in a higher payment, even though there was no record of the person receiving any medical services during the year under review. The report didn’t identify any specific insurers by name.

The U.S. Centers for Medicare and Medicaid Services (CMS) should be doing more to prevent insurers from exploiting this vulnerability, the OIG stated.

CMS didn’t immediately respond to a request for comment from The Epoch Times, but it told Reuters that it is “committed to ensuring that Medicare Advantage plans submit accurate information to CMS so that payments to plans are appropriate.”

In a Nov. 1 letter to the OIG cited in the report, CMS challenged the $6.7 billion estimate of payments linked to chart reviews as too high. The agency agreed with the report’s recommendations for increased oversight and audits.

Meanwhile, a report released on Nov. 25 by Sen. Rand Paul (R-Ky.) detailed wasteful spending by the federal government with a list of programs totaling $230,672,881 in wasted taxpayer money. Paul is the chairman of the Federal Spending Oversight and Emergency Management (FSO) Subcommittee for the Homeland Security and Governmental Affairs Committee (HSGAC).

The fall edition of “The Waste Report,” an annual series published by Paul, listed eight programs the federal government wastes taxpayer money on, including research on nicotine addiction using zebrafish, maintaining a failed self-cleaning toilet, and bringing Serbian cheese up to international standards.

The United States’ rising federal debt has reached more than 22 trillion dollars in total, with some economists describing it as an “insurmountable problem” inextricably tied with Washington’s longtime culture of spending and borrowing.

“It’s very unsustainable,” Dr. Chris Martenson, an economic researcher, and trend forecaster told The Epoch Times in a previous interview. “I consider the rising federal debt to be the equivalent of eating a really big meal at a nice restaurant and then leaving the bill for your kids.”