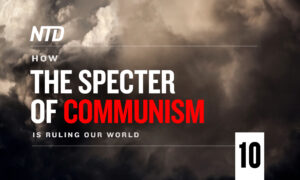 Special TV Series Ep. 10: Infiltrating the West Pt. 4
0
How the Specter of Communism Is Ruling Our World

NTD has produced a special TV series adapted from the book “How the Specter of Communism Is Ruling Our World,” by the editorial team of “Nine Commentaries on the Communist Party.” Watch the ninth episode, “Infiltrating the West Pt. 3,” here.

When the street revolution of Western youths was in full swing in the 1960s, there was one who dismissed their naivety, sincerity, and idealism. “If the real radical finds that having long hair sets up psychological barriers to communication and organization, he cuts his hair,” he said. The man was Saul Alinsky, a radical activist who wrote books, taught students, and personally oversaw the implementation of his theories, eventually becoming the “para-communist” agitator with the most baneful influence for decades.

Aside from his worship of Lenin and Castro, Alinsky also explicitly praised the devil himself. In his book Rules for Radicals, one of the epigraphs says, “Lest we forget at least an over-the-shoulder acknowledgment to the very first radical: from all our legends, mythology, and history (and who is to know where mythology leaves off and history begins—or which is which), the first radical known to man who rebelled against the establishment and did it so effectively that he at least won his own kingdom—Lucifer.”