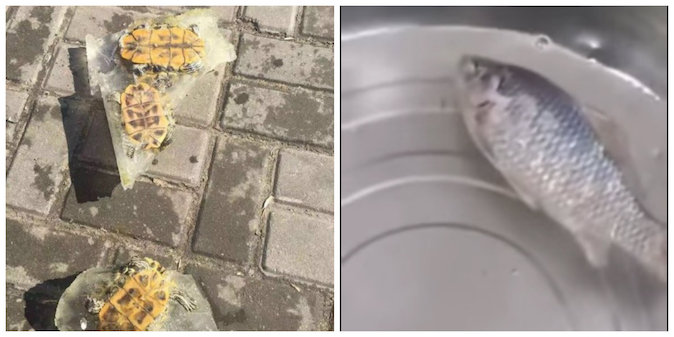 A video of a Chinese man taking an icy white, motionless fish from a freezer and placing it into a metal basin of what appears to be warm water has been making the rounds on Sina Weibo, China’s Twitter equivalent.

As a group of men watch on, the fish floats lifelessly for about a minute, slowly turns a healthy grey, then wriggles to life after spouting a few bubbles.

“Its’s alive!” said a spectator. It’s unclear where or when the video was shot.

Some Chinese netizens joked that cryonics—freezing people and bringing them back to life—might soon be a reality.

“Soon I will have eternal life,” wrote “Murong Bull.”

A netizen using the alias “Jieghii” offered a scientific explanation: “Liquid nitrogen was probably used to freeze the water molecules in the cells. But this type of “freezing” is different from the regular sort, so the integrity of the cells was preserved. That’s why the fish was resurrected when placed in hot water.”

Meanwhile, in the eastern Chinese city of Nanjing, Jiangsu Province, tortoise owners find their pets embedded in ice in their bowl homes as winter sets in, and have started circulating photos of the tortoises’ plight on Chinese social media.

Some netizens say that the tortoises automatically hibernate in the cold and will be alive, while others, including the local police, offer defrosting advice.

“Don’t use hot water. Instead use warm water to thaw the tortoises; some may be alive. Good luck,” the Jiangning Public Security Bureau posted on its official Weibo account.

The Chinese aren’t the only ones having success with bringing frozen animals back from the dead.

In December, the Bingham family in Utah found a frozen kitten in the snow on Thanksgiving. Justin Bingham brought the kitten in front of the fireplace and massaged it for an hour to restore its blood circulation. The kitten, named Lazarus-Olaf, then started breathing, and now lives with the family of Branden Bingham, Justin’s brother.