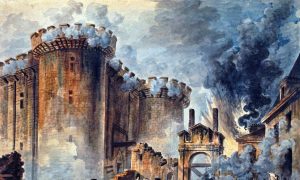 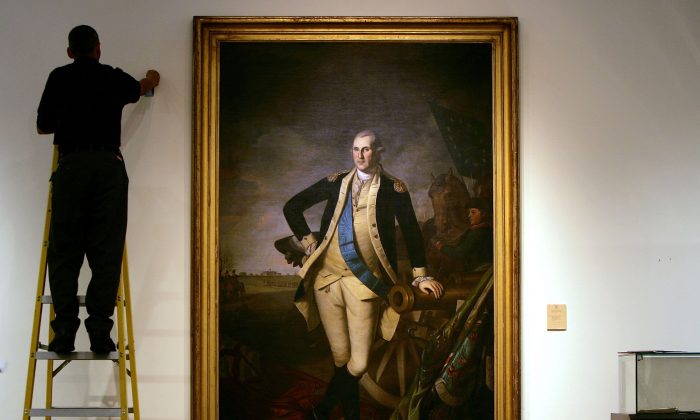 A worker uses a ladder to work near a Charles Willson Peale portrait of founding US President George Washington, shown here as a General after the Battle of Princeton, at Christie's auction house in New York on Jan. 17, 2006. (Spencer Platt/Getty Images)
US Features

Among the stranger exchanges of George Washington was a series of letters on the Illuminati of Bavaria, detailing the society’s attempts to overthrow religion and government in Europe and its presence in the United States under the guise of “Democratic-Republican Societies.” Washington’s sharp criticism of the societies is often interpreted as attacks on political partisanship.

To understand Washington’s views, we need to examine the context. The United States won its independence from the British empire during the war of 1776, and a revolution of a very different type soon followed in France, in 1789. While the Americans established a system rooted in divine faith and individual rights, the French Revolution led to the Reign of Terror and its executions by guillotine, its “Dechristianization” movement seeking to destroy religion, and its laws to govern even the most minute decisions of each person.

Behind the French Revolution were various revolutionary societies such as the Jacobins—from which there is a direct lineage to the creation of communism in the Cercle Social in 1790 and later the Communist League (1847–1852), of which Karl Marx and Friedrich Engels were members when they wrote “The Communist Manifesto.”

Before the communist revolutions swept the world, however, rumors were spreading in the United States and in Europe of a new revolutionary conspiracy. It would be a revolution that sought to create tyranny over all citizens, and that aimed to destroy not just the traditional systems of government, but also traditional beliefs and morality.

In 1798, this conspiracy was brought to the surface by John Robison, a Scottish scientist and professor of philosophy at the University of Edinburgh (who was also, fittingly, the inventor of the siren). He published a book titled “Proofs of a Conspiracy Against All the Religions of Governments of Europe, Carried On In the Secret Meetings of Free Masons, Illuminati, and Reading Societies, Collected From Good Authorities.” The book, which included copies of letters Robinson received as a member of a Freemason lodge, was sent out to warn the various countries about the planned revolutions.

That same year, Augustin Barruel, a French publicist and Jesuit priest, published his “Memoirs Illustrating the History of Jacobinism,” which also warned of a revolutionary conspiracy against government and religion in Europe.

Both books named a revolutionary society, formed in 1776 by Adam Weishaupt and known as the Illuminati of Bavaria, as being central to this conspiracy. The group allegedly played a key role in the French Revolution and had teachings very similar to what would later be found in communism.

The Illuminati of Bavaria itself had already been exposed between 1786 and 1787, when the Duke of Bavaria, Charles Theodore, caught wind of the conspiracy. Theodore banned all secret societies, including the Illuminati, had the homes of conspirators raided, and had many of the captured Illuminati members’ letters and literature exposed to the public. Weishaupt went into exile in Gotha, where he continued writing.

Amidst this upheaval in 1798, Washington was mailed a copy of Robison’s “Proofs of Conspiracy.” According to the National Archives, the book was still in Washington’s library at the time of his death.

The sender was G.W. Snyder, who wrote to Washington on Aug. 22, 1798, warning him that the Illuminati was attempting to “overturn all Government and all Religion, even natural” and “to eradicate every Idea of a Supreme Being, and distinguish Man from Beast by his Shape only.” Since the Illuminati in Europe was attempting to subvert the Freemasons, Snyder asked Washington, who was also a Mason, to beware of the organization’s attempts.

Through a series of exchanges, Washington told Snyder that the revolutionary societies had not infiltrated the Freemason lodges in the United States, yet said he was certain the doctrines of the Illuminati and the principles of Jacobinism were already spreading through other means in America.

Washington wrote to Snyder on Sept. 25, stating, “I have heard much of the nefarious, & dangerous plan, & doctrines of the Illuminati, but never saw the Book until you were pleased to send it to me.”

Snyder responded again on Oct. 1, noting that the revolutionary organizations were not just spreading through the Freemason lodges, but also were taking form in Germany under various groups such as the “German Union” and “Reading Societies” for an “Order of Men,” and in France under the “Jacobine-Club.” He also warned that, in the United States, the organization appeared to take form in the “Meetings of the Democratic-Societies.”

Washington wrote that he didn’t believe the Freemason lodges in the United States had yet been infiltrated by the “diabolical tenets” of the revolutionary movements, yet added that the tenets of the Illuminati and Jacobins could be seen in the “Democratic Societies” that were spreading throughout the country at the time.

“That Individuals of them may have done it, and that the founder, or instrument employed to found, the Democratic Societies in the United States, may have had these objects—and actually had a separation of the People from their Government in view, is too evident to be questioned,” he wrote.

Between 1793 and 1796, more than 40 radical “Democratic-Republican Societies” were established throughout the United States. These organizations often used the labels of either “democratic” or “republican” in their titles. This followed the creation of the Democratic-Republican Party in 1792 by figures including Thomas Jefferson and James Madison, and by individuals who opposed the new constitution.

The Democratic-Republican Societies, meanwhile, were known for their support of the violent French model of revolution, which aimed to reorganize all society through violent revolution and to replace religious moral order with a new totalitarian state under the banner of “reason.” They took various forms, including the German Republican Society and the Democratic Society of Pennsylvania.

They tied to similar societies that ran under the illuminist brand in Europe around the same time, in the Republican Carbonari and the Democrat Carbonari behind the Cercle Social. Communist leader Leon Trotsky described these societies in his autobiography as being an origin of the communist revolution. He wrote, “In the eighteenth century, freemasonry became expressive of a militant policy of enlightenment, as in the case of the Illuminati, who were the forerunners of revolution; on its left, it culminated in the Carbonari.”

In the United States, the Democratic Societies were regarded by many founding fathers as a fundamental threat to the new American idea.

There were rumors that one of the clubs in western Pennsylvania was behind the Whiskey Rebellion of 1794. Washington sent a 12,500-man militia to curb the “insurrection” and declared that it was the “first ripe fruit of the Democratic Societies.”

He added in a Sept. 25, 1794, letter regarding the societies and their rebellion, “I did not, I must confess, expect it would come to maturity so soon.”

He described the uprising as an attempt by the Democratic Societies to “spread their nefarious doctrines, with a view to poison & discontent the minds of the people against the government” and said their “wicked and abominable measures are practiced to sap the Constitution, and lay the foundation of future Slavery.”

Washington’s harsh criticisms of the societies led to their downfall until after the War of 1812. He had continued to condemn the Democratic Societies even up until his 1796 farewell address, when he declared, “The very idea of the power and the right of the people to establish government presupposes the duty of every individual to obey the established government.”

He declared that these societies would “become potent engines, by which cunning, ambitious, and unprincipled men will be enabled to subvert the power of the people and to usurp for themselves the reins of government.”

Yet, by 1824, the societies had again gained influence and run four candidates under the Democratic-Republican banner. This culminated in the creation of the Democratic Party and the National Republican Party.

The creation of these parties stoked fears of what Washington had warned of, and rumors of the revolutionary societies that were attempting to destroy moral order. Around this time, in 1826, Captain William Morgan, a disenchanted Freemason, was arrested after announcing he would publish a book exposing the secrets of the Freemasons in the United States. He then disappeared and was believed to have been assassinated.

After the disappearance of Morgan, newspaper publisher David Cade Miller printed Morgan’s book in 1826. This led to the creation of the Anti-Masonic Party and the Anti-Masonic Movement in 1828 to oppose the perceived threat in the new Democratic Party.