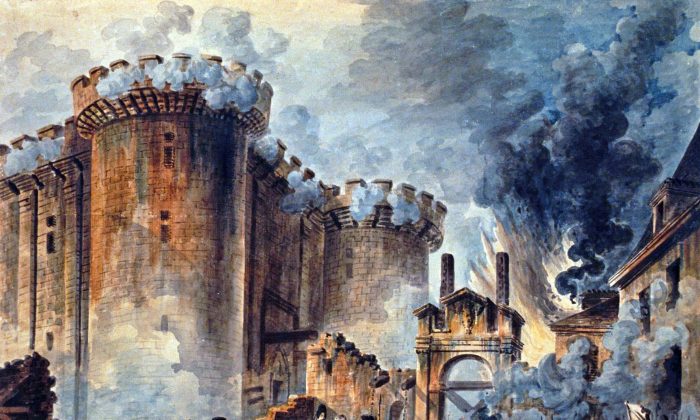 "The Storming of the Bastille", Visible in the center is the arrest of Bernard René Jourdan, m de Launay (1740-1789). (Creative Commons/Wikimedia)
The Dead End of Communism

And if Babeuf could still speak today and was asked about the origins of his belief, he’d likely reply that, well, it’s complicated.

On July 28, 1794, French politician Maximilien Robespierre was beheaded in front of a crowd by guillotine, bringing an end to the dictatorship of the Jacobin Club, a revolutionary political society, during the French Revolution.

The beheading of Robespierre also brought an end to his Reign of Terror—a bloody segment of the French Revolution in which he had more than 16,000 people beheaded.

Babeuf’s role in history came soon after the death of Robespierre—an event that sent the numerous radical figures beneath him into disarray. According to the book “The Red Flag” by David Priestland, “Babeuf condemned Robespierre for betraying the artisans and peasants of France, and became the leader of one of the first communist movements.”

Under Babeuf’s new vision, money would be eliminated, and people would be forced to hand over all fruits of their labor to a ‘common storehouse.’

Babeuf’s goal was to overthrow the French Directory—the revolutionary government that lasted from 1795 to 1799—and to restore power to the Jacobins with “egalitarian communism” under a new system drawn from the then-emerging ideas of socialism.

Babeuf had “developed a more radical condemnation of property than he had under the Jacobins,” according to Priestland, and he abandoned the idea that agrarian law alone could bring about his new vision of “absolute equality.”

Under his new vision, money would be eliminated, and people would be forced to hand over all fruits of their labor to a “common storehouse.” From there, an all-powerful government would be in charge of redistributing these goods.

Babeuf took a lesson from what he regarded as the shortcomings of moderate Jacobinism and took note of Robespierre’s widespread use of violence in the Reign of Terror. Babeuf sought an even more extreme system that would use violent revolution to seize control and force its will on society.

This plot took form in Babeuf’s Conspiracy of Equals, which he formed while imprisoned in February 1795 for “inciting rebellion, murder, and dissolution of the national representative body,” according to “A Critical Dictionary of the French Revolution.” The book notes that the conspirators included “‘ex-terrorists’ and ‘neo-terrorists’ among the prisoners: Germain, Bodson, Debon, and Buonarroti.” They were soon joined by other radicals.

However, before Babeuf’s armed uprising could unfold on its set date of May 11, 1796, the French Directory caught wind of it. On May 10, one day before the plot was to unfold, Babeuf and many of his conspirators were arrested, and after a two-month trial, many were sentenced to death.

Babeuf was beheaded by guillotine on May 27, 1797, yet his theories were carried on by one of his surviving conspirators, Filippo Buonarroti, who documented the history of the failed movement.

Built on the ideas of Babeuf, a new secret society known as the League of Outlaws soon emerged in Paris.

A German tailor named Wilhelm Weitling joined the society after arriving in Paris in 1835, according to Priestland, and soon became “one of the best known communist figures of the 1840s.”

Weitling took Babeuf’s ideas of violent revolution, state-enforced equality, and the destruction of ownership and, according to Priestland, infused these with his own ideas of a “Christian apocalyptic vision.” Under him, the League of Outlaws also changed its name to the League of the Just.

Many radical secret societies existed in Europe at the time, and many figures and newspapers were spreading the new ideas of socialism and communism. This held especially true in Paris, which saw many attempted revolutions throughout the 1800s.

The League of the Just joined the May 1839 Blanquist rebellion, led by Louis Auguste Blanqui. He would later become leader of what may be regarded as the first communist government, the Paris Commune of 1871, which waged a program of killing and destruction that in just over two months left tens of thousands dead and an estimated quarter of Paris and its cultural relics in ruins.

However, communism had begun to take root before the Paris Commune, and from those early beginnings, modern communism, based in state-enforced atheism and endless struggle, would grow.

The League of the Just relocated to London after the failed 1839 rebellion and formed the Educational Society for German Workingmen in 1840. Then, at a congress in June 1847, the League of the Just joined with the Communist Correspondence Committee formed one year prior and headed by Karl Marx and Friedrich Engels.

The manifesto has since become a core text of modern communist regimes. Yet, according to “Marx and the Permanent Revolution in France” by Bernard H. Moss, it was at the time merely “a sketchy pamphlet written for a small sect” and didn’t immediately gain much attention.

The Paris Commune: When the Specter Came to Earth

The manifesto had little immediate impact because in 1848 “most of the ideas it contained were commonplace among working-class democrats, certainly in France,” according to Moss.

Instead, it gained popularity as Marx and Engels raised their profiles over time, since it provided a short and consolidated pamphlet that would relay its teachings to people who would be unlikely to slog through Marx’s and Engels’s other writings.

Another major part played by Marx and Engels, however, was in their attempts to unify the various socialist and communist movements of their time—work first attempted in the German Workers’ Club, then successfully through their roles in the International Workingman’s Association, also known as the First International.

Marx and Engels sought to unite the numerous socialist and communist movements under a common ideology, and they set down a form of communism that pulled deeply from its roots in the ideas behind the French Revolution. Marx and Engels made a fervent call for the destruction of all hierarchy that could challenge their own totalitarian hierarchy and, like the French Revolution, took aim to destroy the family, property, nobility, and religion.

While “The Communist Manifesto” seemed to call for lofty-sounding concepts like equality and sharing, it promotes ideas that are disastrous to humankind. The manifesto states that “communism abolishes eternal truths, it abolishes all religion, and all morality.”

In place of traditional virtues and personal accountability, the manifesto wanted an all-powerful government that would forcefully destroy all social structures and place itself as the sole power that would force on its citizens a new system of atheism and class struggle.

Marx and Engels wrote in 1845, in “The Holy Family,” that “the revolutionary movement which began in 1789 in the Cercle Social … and which finally with Babeuf’s conspiracy was temporarily defeated, gave rise to the communist idea which Babeuf’s friend Buonarroti re-introduced in France after the Revolution of 1830. This idea, consistently developed, is the idea of the new world order.”

In just over a century, this new system would, according to “The Black Book of Communism,” be responsible for the deaths of over 100 million people.

The Dark Origins of Communism: Part 3 of 3

The Dark Origins of Communism: Part 2 of 3