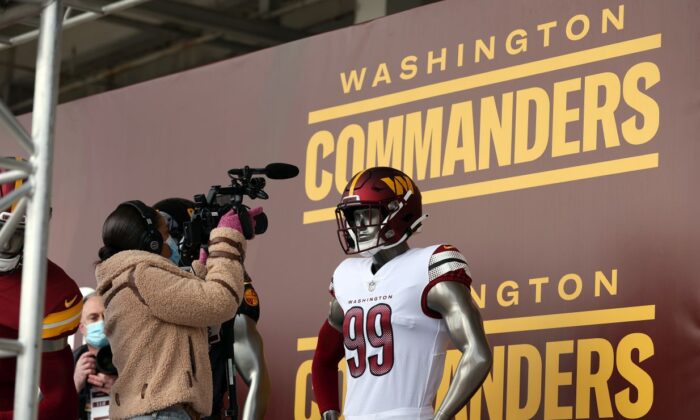 Members of the media take pictures and video of the new uniforms during the announcement of the Washington Football Team's name change to the Washington Commanders at FedExField in Landover, Md. on Feb. 2, 2022. (Rob Carr/Getty Images)
NFL

The NFL team’s name is a reference to the Washington area’s military ties, according to team President Jason Wright.

“It’s a name befitting a 90-year-old franchise,” Wright told the “Today” show Wednesday. “It’s something that broadly resonated with our fans and something that we believe embodies the values of service and leadership that really defines the DMV and this community.”

In a Twitter post, the team also confirmed its name change. Some aspects of the team’s Redskins imagery remain the same, including the burgundy, gold, and white color scheme.

The NFC East team announced its decision to change its name and imagery from Redskins in the midst of left-wing riots and protests over the summer of 2020 following the viral George Floyd incident in May of that same year. It had been facing mounting pressure as critics claimed it was racist and insensitive to Native Americans before it changed its name to the Washington Football Team in July 2020.

“I think the Commanders is a name that is going to be, hopefully, one that people talk about going forward,” former quarterback and NFL commentator Joe Theismann said in public remarks on Monday ahead of the announcement. “Commander, basically, is Washington D.C. A lot of commanders in Washington D.C., in the Pentagon, and a lot of different branches of the service. So, to me, that’s really the way I’m looking at it, as positions of leadership when it comes to the name.”

The team was founded as the Boston Braves in 1932 before becoming the Redskins the following year. The franchise later moved to Washington in 1937, netting three Super Bowl victories to date.

In 2021, the Washington team banned fans from wearing Native American headdresses and face paint at its home stadium in Landover, Maryland.

However, a 2020 survey from the University of California—Berkeley of 1,000 Native Americans found that at least half of respondents were offended by the team’s former name.