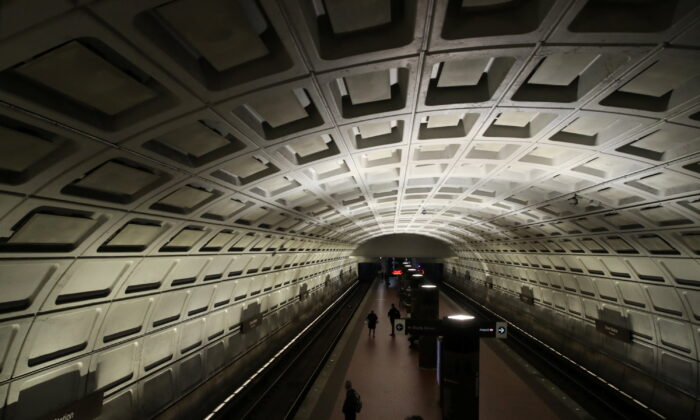 A few subway riders stand on the platform, normally bustling with rush hour commuters, at the Union Station Metro station in Wash., on March 16, 2020. (Jonathan Ernst/Reuters)
US News

WASHINGTON—The Washington-area subway system said Sunday nearly half of the system’s 500 rail operators have lapsed recertification and will remove some from service, a decision that will lead to temporarily delays in some train services.

The system known as the Metro, which serves the District of Columbia and parts of nearby Virginia and Maryland, will remove from service 72 train operators who went out of compliance before May 2021. That will result in a temporary reduction in Green and Yellow line service from every 15 minutes to every 20 minutes.

The Metro added that “extra trains to relieve crowding, support special events, or replace out-of-service trains may not be available. Service impacts are expected to continue until the end of May.”

The Washington Metrorail Safety Commission in October separately ordered the subway system to remove about 60 percent of its rail cars following inspections after the derailment of a train. The system has been operating on a reduced schedule as it continues to work to eventually resume the use of those train cars and add others.

Washington subway board Chair Paul Smedberg said in a statement Sunday that the board learned on Thursday from the safety commission that nearly half of all rail operators had lagging recertifications, calling it “unacceptable and extremely disappointing.”

The board directed management to “provide a full accounting of how and why this occurred.”

The Metro said the process to recertify rail operators will take an estimated two to three months.

The subway system is seeing increasing traffic. The Metro said earlier this month that March rail ridership was up 126 percent over year-earlier levels but still only one-third of pre-pandemic levels on weekdays as many still work from home.

The Metro’s safety department is separately reviewing the refresher training of more than 2,500 bus operators, which follows a different process.