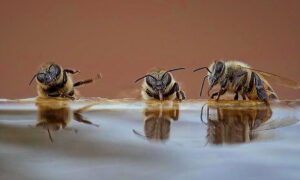 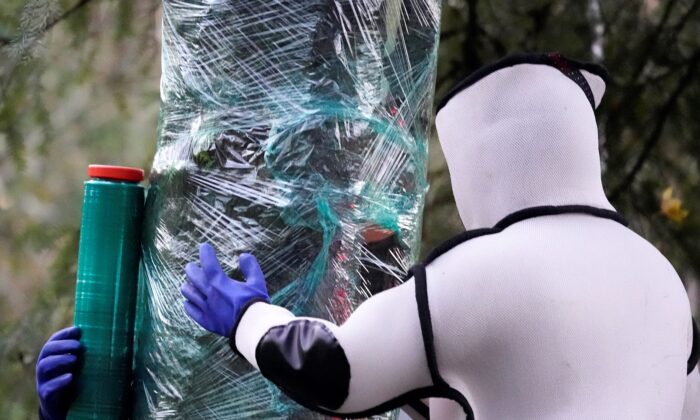 Wearing protective suits, Washington State Department of Agriculture workers finish wrapping a tree in plastic after working to eradicate a nest inside of Asian giant hornets in Blaine, Wash. on Oct. 24, 2020. (Elaine Thompson/AP Photo)
US News

Washington state eradicated its first Asian giant hornet nest of the year by vacuuming out 113 worker hornets and removing bark and decayed wood near the nest, Washington State Department of Agriculture (WSDA) officials said on Thursday.

The so-called stinging “murder hornets,” the world’s largest hornets, can grow to 2 inches in length and prey on native bee and wasp populations, consuming honeybee hives and threatening agriculture.

The hornets are not native to North America. They were first detected in the United States in 2019, when a hornet was reported in Washington’s Whatcom County, near the Canadian border, according to the WSDA.

This latest nest was uncovered in the base of a dead alder tree in Whatcom County and was eradicated on Wednesday.

“They did actually attempt to sting us this time,” said Sven Spichiger, the department’s managing entomologist, during a virtual news conference on Thursday.

“We are all very happy to say that our hornet suits worked very well and no injuries were sustained. We responded to this by blocking off the second entrance, which stopped them from coming out,” he said.

In addition to the 113 worker hornets vacuumed out, staff netted another 67 other hornets in the area. The nest itself had nearly 1,500 hornets in various stages of development, the WSDA said in a statement.

Some of the live hornets were sent to the USDA for research. The others will be destroyed, the agency said.

WSDA said it will continue to trap for Asian giant hornets through the end of November.

Once spotted and captured, hornets are fitted with a radio transmitter and released in the hope they can be followed back to the nest.

After a nest is confirmed to be in a tree by thermal imaging, the tree is wrapped in plastic while its trunk is hit with a piece of wood to get the hornets out so they can be vacuumed up and eradicated.