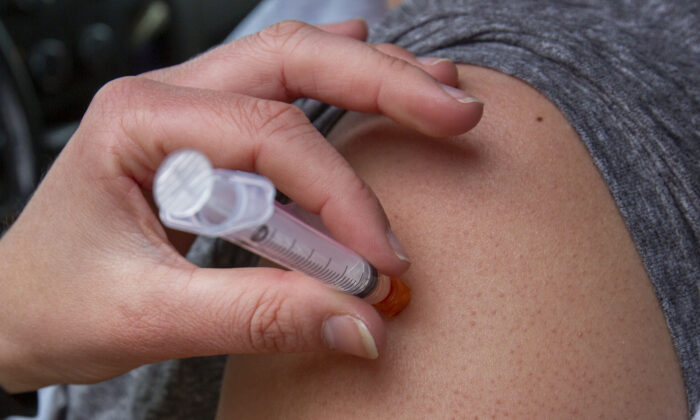 A person receives a COVID-19 vaccine at a drive-thru clinic at Richardson Stadium in Kingston, Ont., on May 28, 2021. (The Canadian Press/Lars Hagberg)
Vaccines & Safety

Agencies in Washington state have begun sending out separation notices to employees who have not yet shown proof that they are vaccinated against COVID-19.

Department of Licensing spokesperson Nathan Olson told The Seattle Times that it had sent out 66 separation letters on Friday to workers who have not yet submitted proof of vaccination or applied for a vaccine exemption. Department of Labor & Industries spokesperson Matt Ross told the Times that his agency had sent out 140 letters on Saturday and planned to send out more on Monday.

Other large agencies, such as the Washington State Patrol, Department of Corrections, and the Department of Social and Health Services, are also trying to establish which of their employees have not yet been inoculated.

The Department of Corrections said it had previously sent out about 1,000 early notices to workers to confirm whether or not they have been vaccinated. The agency has approximately 8,600 employees who operate the state’s 12 prisons.

Spokesperson Jacque Coe told the Times that most of the department’s employees who received these early notices were represented by a union and so would go through an investigative process before a formal notice of separation can be sent.

The separation notices come after Washington Gov. Jay Inslee (D) mandated in August that all state workers, onsite contractors, and volunteers must get one of the three COVID-19 vaccines by Oct. 18, or be terminated.

The requirement applies to employees working in higher education, childcare, K-12 education employees, and most health private health care and long-term care settings as well as teleworking state employees. Inslee later updated the measure to include an expansion of statewide mask mandates to all individuals, regardless of vaccination status.

Inslee said at the time that employees who refused to be vaccinated would be subject to non-disciplinary dismissal from employment for “failing to meet the qualifications of the job.” Employees with a valid medical or religious exception would not be subject to dismissal. He added that the mandates were being implemented to prevent business and school lockdowns, Inslee said.

The employee vaccine mandate is one of the strictest across the United States and has been heavily criticized by opponents, including a group of nearly 90 Washington state troopers, firefighters, and other employees who last month filed a lawsuit against Inslee, claiming that his mandate exceeded the authority of his office and violated the rights of state workers guaranteed by the state’s constitution.

Other states and local governments have allowed employees to choose to have weekly COVID-19 testing as an alternative to getting vaccinated.

Governor Inslee’s order affects roughly 60,000 state employees in Washington state but when asked by the Times about the potential to lose workers, Inslee’s spokesperson Tara Lee said that “warning notices are just that, warnings.”

“This is a snapshot in time and not what the final numbers will be,” Lee said. “We remain hopeful that more state employees will choose to get vaccinated and remain in the workforce.”

The spokesperson also noted that The Department of Corrections and other agencies have worked on contingency plans to ensure government services still continue as normal.