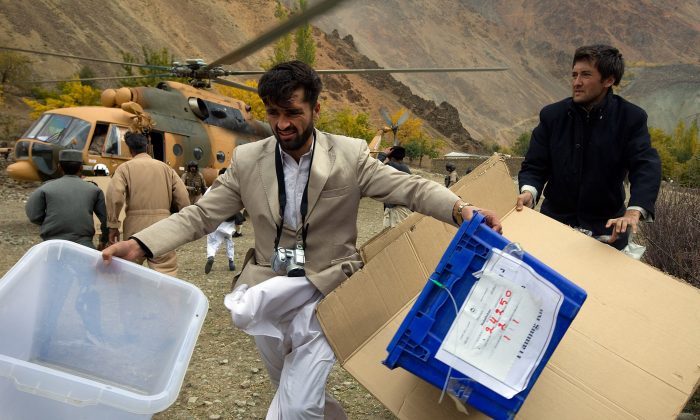 Afghan electoral commission workers unload election material from a helicopter on Nov. 1, 2009, in the remote village of Kofab, Afghanistan. The 2009 election was wrought with fraud, which observers hope will not be the case in 2015. (Paula Bronstein/Getty Images)
Asia & Pacific

Focus on military, not political, transition
By Gary Feuerberg

WASHINGTON—In one year, Afghanistan will hold a presidential election, and for the first time since 2001, Hamid Karzai will not be on the ballot. Karzai will be ineligible to run because of term limits.

The Afghan presidential election will happen in the same year the United States and international forces hand security control over to Afghan national forces. Parliamentary elections will follow in 2015.

Washington, preoccupied with troop levels, is focusing little attention on ensuring a credible election next year.

“Without an appropriate political environment for the country, it is going to be very difficult for Afghanistan to succeed,” said Jim Marshall, president of the U.S. Institute of Peace (USIP), who introduced a panel of Afghan election experts at USIP in Washington, D.C., on April 5. Marshall is a former Georgia congressman (2003–2011) and has visited Afghanistan 15 times.

The date of the forum was chosen to mark exactly one year remaining before Afghans go to the polls—oftentimes risking their lives.

Also on April 5, an op-ed by Marshall appeared in Foreign Policy Magazine. He wrote, “Regardless of who wins, Afghans must believe the electoral process was reasonably fair and representative, or the new government will be viewed as illegitimate, prompting spiraling violence and instability.

“Despite these existential stakes, however, the United States has shied away from publicly expressing its expectations and concerns about details of the developing Afghan electoral process.”

As U.S. officials discuss whether the number of troops in the country should be 8,000 or 20,000, Marshall said, the political transition should be given at least as much consideration.

“If Afghanistan descends into chaos, these troop levels won’t make any difference,” he said.

Secretary of State John Kerry mentioned the importance of the upcoming Afghan elections in his nomination hearing before the Senate foreign relations committee on Jan. 24.

“Having an acceptable election … [that] is acceptable according to international standards and observers will be critical to our ability to have the kind of transition we want to have, and to have confidence that the government that succeeds in 2014 has legitimacy,” he said, according to the Guardian.

Kerry said without legitimate elections, it will be hard to convince Americans and International Security Assistance Force allies to stay engaged in Afghanistan.

Marshall said that when he visited with Afghan leaders, nearly all of them were focused on the political transition and not the military transition.

On the panel, Nader Nadery, an Afghan national and executive chairman of the Free and Fair Election Foundation of Afghanistan, said speculation on who will be the next president dominates public discourse.

“In every single household, over dinner table and lunch table, you will hear discussion about the election,” Nadery said.

Nadery, who served as a commissioner of the Afghan Independent Human Rights Commission (AIHRC), said there is a realization among those engaged in politics that elections cannot run the way they did in the past. Before, campaigns centered on individuals. This time, parties need to put forward “a future platform and vision for the country.”

He is concerned that, with only one year to go, potential candidates for the presidency have not emerged.

Hossai Wardak, an Afghanistan expert at USIP and an Afghan national, said that no coalition has formed and presented itself to voters.

People need to be motivated to vote and to understand the importance of making candidates accountable, she said. She worries that Afghans won’t be motivated to vote. Getting women out to vote will be a special challenge, and their security is highly important, Wardak said.

The chief reason for the fear of an illegitimate election is the memory of documented massive electoral fraud in the last election.

Galbraith said of the Aug. 20, 2009 election in an op-ed for the Washington Post published Oct. 4, 2009: “As many as 30 percent of Karzai’s votes were fraudulent, and lesser fraud was committed on behalf of other candidates. In several provinces, including Kandahar, 4 to 10 times as many votes were recorded as voters actually cast.”

Scott Smith, deputy director for Afghanistan programs at the U.S. Institute of Peace, said Karzai was not served by the fraud that overzealous officials perpetrated on his behalf. He pointed out Karzai did have some responsibility in the matter, however, since he appointed all seven members of the Independent Election Commission, which despite its name, was beholden to him.

Smith said the fraud was “embarrassing,” “blatant,” and “undermined Karzai’s legitimacy.” Eventually, 1.5 million votes were ruled as fraudulent and removed from the count. As a result, Karzai received less than 50 percent of the vote, forcing a runoff, which though humiliating, he finally had to accept.

The United States Agency for International Development (USAID) is providing some funding to aid the election process. Scott Worden, a senior policy adviser with the Office of Afghanistan and Pakistan Affairs at USAID, said the international community has a stake in Afghan democracy and it is important they “get it right,” in these elections.

The U.S. role is to support the process and be respectful of Afghan sovereignty and not favor any candidate, Worden said.

The future of Afghan democracy depends on the players sharing power and playing by the rules of the game. Worden suggested that election laws need to be passed by Parliament for the process to be legitimate and transparent.

Nadery said Parliament’s delay in adopting an election law was putting the process at risk. He fears that if not done soon, the president will issue a decree that could undermine democratic participation and the Legislature.

Afghanistan’s Independent Election Commission (IEC) needs to be a credible institution; it needs to show it has a “positive plan” to address past flaws, said Worden.

In 2009, Worden served as a U.N.-appointed international commissioner on the Afghanistan Electoral Complaints Commission (ECC) for the presidential and provincial council elections.

“In both the 2009 election and [the] 2010 parliamentary election, the key decisions were actually made in the complaint process,” Worden said. Presently, there is no ECC, but some mechanism for handling complaints will be created, and it is crucial that it also be regarded as credible and independent, he said.

The IEC will be coming out with an operational plan “any day now,” Worden said. The plan will give the rules for the elections.

Operations are important, he said, but it is also important how the commissioners and the chairman are viewed.

The IEC needs to do something about the low participation rate, Worden said. Afghanistan, with a population of 30 million or more must have about 15 million eligible voters. But turnout since 2004 has gone from 7 million to less than 4 million.

Security is a key component of an operational plan.