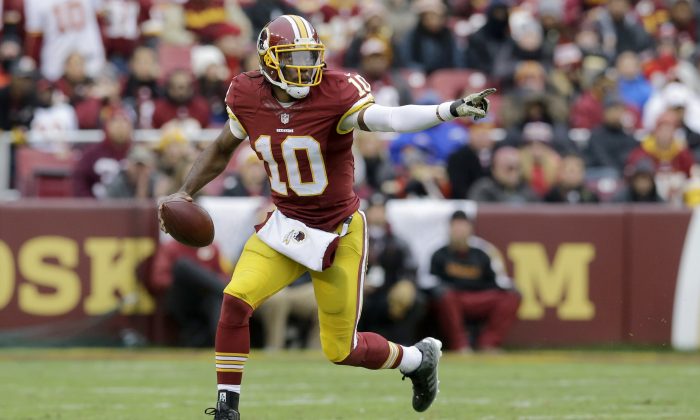 Washington Redskins quarterback Robert Griffin III (10) scrambles with the ball during the second half of an NFL football game against the Tampa Bay Buccaneers in Landover, Md., Sunday, Nov. 16, 2014. (AP Photo/Patrick Semansky)
NFL

The Washington Redskins are preparing for Sunday but the news and rumors are ramping up.

McCoy won his only game this year against the Dallas Cowboys before giving way to Griffin upon the latter’s return a week later.

Cousins struggled in multiple starts, ultimately being benched in favor of McCoy.

Those scenarios lead to the thinking that McCoy would play if Griffin is indeed benched.

Casserly told NFL Network that the tension between Gruden and Griffin is putting the team on “a path of destruction.”

“Well, I’ll tell you what, this is on a path of destruction right now. First of all, when you watch RGIII play, this was the worst game I’ve ever seen him play,” Casserly said of the Redskins loss to Tampa Bay on Sunday.

“Jay Gruden talked about the negatives. I don’t have to go through them anymore, but this is the worst game I’ve ever seen him play.”

“My gut is he would want to play one of the other two guys because they can run the system better,” Casserly added. “And the reality is they’ve played better and they’ve won with them.”

Casserly said that if owner Dan Snyder is pressuring Gruden to continue starting Griffin even if Gruden doesn’t want to, then Gruden should “make a stand.”

Redskins fans started chanting for McCoy, saying “We want Colt,” in the game against the Buccaneers.

Washington Post columnist Thomas Boswell says that Gruden “acted like a strong NFL head coach” when he “became the first man in the Washington football operation with the guts to be bluntly analytical, critical and honest about Robert Griffin III’s abilities as a quarterback and the ton of work he must do to master his craft.”

But he says what comes next is more important.

“If this is a candid cathartic moment that bonds Gruden and Griffin, convinces them that their futures are linked and they must help each other, few better things could happen to a franchise that’s been in the wilderness for most of 23 years,” he wrote.

“If Gruden’s remarks, pungent at face value and a punch in the mouth if taken the wrong way, are a wedge that divides the rookie coach from his quarterback, then send a Hazmat caravan to Ashburn pronto — toxic waste spill in progress.”

Boswell says that Gruden will likely give Griffin “every last chance” before he turns to McCoy or Cousins.

Jay Gruden said he shouldn’t have been so brutally candid about Robert Griffin III’s play. The Redskins coach also took the blame for allowing the Redskins to become “too much about one guy.”

Griffin also stuck to the team script, repeatedly stressing that he’s “focused on San Francisco” and saying little else during his weekly news conference.

The Redskins needed a course correction after several days in which their quarterback was under siege on multiple fronts. Gruden and Griffin tried to settle things down a bit Wednesday, with the coach shifting more blame onto himself and RG3 doing his best to stay mum.

“Early on in the season when I first got the job, I knew there was going to be a lot of questions about Robert,” Gruden said. “But I want to try to make this thing about the Redskins and not about him, and somehow we’ve made it more about him than about the team. And that’s my fault.”

Gruden said specifically that he went too far earlier this week when he detailed Griffin’s many “fundamental flaws” — including poor footwork and bad reads — in a 27-7 loss to the Tampa Bay Buccaneers.

“I think it was a mistake on my part,” Gruden said. “After a loss like that, we’re very disappointed in the way we played, and the question came up. … I just answered it, the first thing that came to my mind, and sometimes the first thing that comes to your mind isn’t the smartest thing, and it wasn’t the right thing to do on my part.

“Corrections should be in-house with everybody involved. The play speaks for itself, the production on the field spoke for itself. I didn’t have to really elaborate on any individual fundamental things.”

Gruden also wanted it made clear that the Redskins lost in part because he was outcoached by Tampa Bay’s Lovie Smith.

Griffin, meanwhile, turned in a podium performance that would make Bill Belichick proud as the Redskins (3-7) began practice for Sunday’s visit to the San Francisco 49rs. As the New England Patriots coach is known to do, Griffin gave short, non-answers and used the exact phrase “focused on San Francisco” nine times.

“Jay wants me to play better. I want to play better,” Griffin said. “We’re focused on San Francisco and making that happen, so that’s all I’ve got to say about that.”

Griffin was stung earlier this week by the implication that he had been overly critical of his teammates in his postgame remarks after the Buccaneers loss. In reality, Griffin spent much of that postgame news conference taking the blame for his six sacks and other aspects of his play, but he did add that “great quarterbacks” such as Aaron Rodgers and Peyton Manning “don’t play well if their guys don’t play well.”

On Monday, Gruden piled on a bit, saying that: “Robert needs to understand he needs to worry about himself, No. 1, and not everybody else.” That was also when the coach gave the searing review of Griffin’s play.

Griffin responded that same day on social media that it’s “unfortunate that anyone would take a piece of my press conference and say I threw my teammates under the bus.”

Griffin didn’t elaborate much on Wednesday. He did say that he had addressed the team, and that a “large majority of the locker room” has reached out to him in the last few days.

On getting better as a quarterback, he said: “I’m in my second offense in this league. You know, just trying to hammer everything down and get better at my craft like Coach wants me to.”

Griffin said several times that he was doing what Gruden wants him to do, but he said his scaled-back appearance at the microphone podium wasn’t specifically the result of coach’s orders.

“No, he just wanted me to focus on me,” Griffin said. “And I’m going to do that to the best of my ability. I’m a quarterback, man. I’ve got to help this team win.”

Gruden, for his part, said Griffin is “at a stage right now in his career where we need to see improvements,” but he also stressed that too much can be expected of the third-year player.

“We have such high expectations for these kids coming out of college that they should be at the same level as Peyton Manning and Tom Brady and Philip Rivers and Aaron Rodgers,” Gruden said. “It’s not fair. They’re going to have some growing pains.”