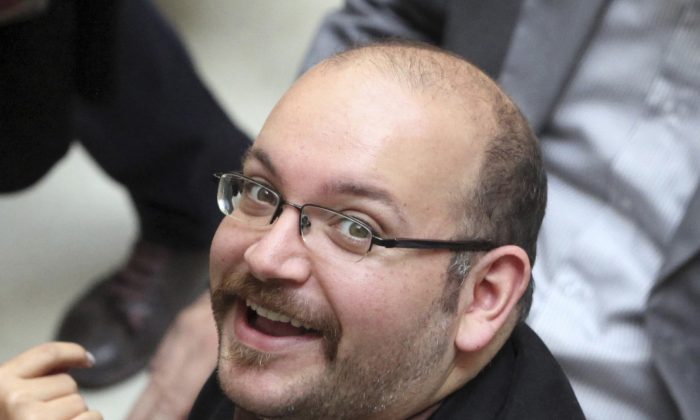 Jason Rezaian, an Iranian-American correspondent for The Washington Post, smiles as he attends a presidential campaign of President Hassan Rouhani in Tehran, Iran.
US

Washington Post Reporter Detained in Iran Back in Court

The session was expected to last until early in the afternoon in Iran, according to IRNA.

Rezaian, the Post’s 39-year-old bureau chief, had his first closed-door hearing on May 26 in a Revolutionary Court on charges including espionage and propaganda against the Islamic Republic. U.S. officials, the Post and rights groups have criticized his trial.

Iran, Not ISIS, Is the Real Menace
Benefits of a Deal With Iran

Rezaian, his wife, Yeganeh Salehi, and two photojournalists were detained on July 22 in Tehran. All were later released except Rezaian, who has been held over 300 days.

IRNA said two other people detained with Rezaian were also in court Monday. It did not elaborate or say who those two are, but Rezaian’s defense lawyer, Leila Ahsan, has previously said Salehi and one of the two unnamed photojournalists also face trial.

As in the May hearing, reporters gathered in front of the courthouse gate did not see Rezaian, his lawyer or the other two co-defendants arrive for the session. In Iran, authorities usually bring those charged in sensitive cases into the building through another gate, which is closed to the public.

Rezaian is a dual U.S.-Iranian citizen who was born and spent most of his life in the United States. Iran does not recognize other nationalities for its citizens.

Salehi, a reporter for The National newspaper in Abu Dhabi, remains in Iran, barred from traveling abroad, the Post has said.

At his first hearing, the court alleged that Rezaian had written to President Barack Obama and also cited a trip he made to the U.S. Consulate in Dubai, Iran’s semi-official Mehr news agency reported.

Martin Baron, the Post’s executive editor, has disputed the nature of the alleged correspondence, saying that Rezaian filled out an online job application for the Obama administration after the 2008 election, though he was never hired.

The Post has said Rezaian faces 10 to 20 years in prison if convicted. His brother, Ali Rezaian, earlier said that Jason had visited the consulate in Dubai to get a U.S. visa for his wife.