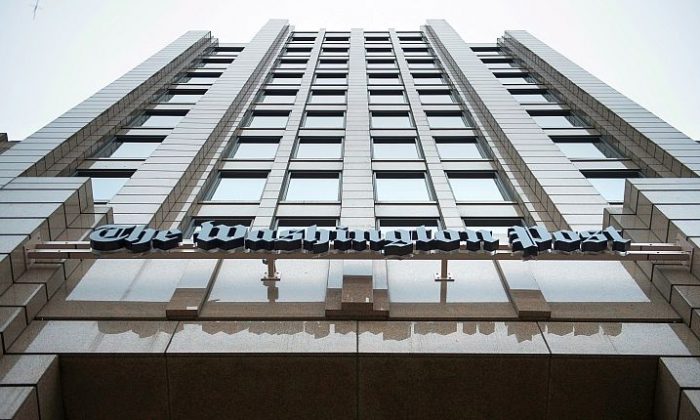 WASHINGTON—The Falun Dafa Association of Washington DC has called for The Washington Post to cease publishing advertising supplements by the Chinese communist-controlled newspaper China Daily, which are inserted into its print editions and can be found online.

Association spokesman Frank Lee said at a news conference, Feb. 2, “We are deeply saddened to see the Washington Post, one of the most respected newspapers in the country, sacrifice its principles for profits, and assist an evil regime to spread its propaganda to the American people.”

While the paid inserts in the Post have been around for longer than a decade, local practitioners are upset and indignant over one published on Jan. 25, 2017. On the back cover was an article, titled “Blasphemy masquerades as art” that practitioners say slanders Shen Yun, the New York-based, premiere classical Chinese dance and music company. They say that the Post should never have allowed this article, and that unless this kind of China propaganda is rebuffed, it will serve as an invitation for worse slandering of Falun Gong and possibly other minority groups.

The association is the presenter of Shen Yun in Washington, D.C., which had just completed a successful week-long run at the Kennedy Center. The China Daily article is pure propaganda say the practitioners, containing falsehoods and disparaging remarks about the performers. The article states that Shen Yun is “an exercise in brainwashing,” a “travesty,” and “blasphemy against real art.”

The connection between the association and the show is very transparent, according to Lee. Both the Kennedy Center and Shen Yun websites make clear that Shen Yun is presented by Falun Dafa Association of DC. The Shen Yun brochure that the Association mailed out illustrates the dance pieces about the persecution of Falun Gong, Lee said.

The article’s slander of Shen Yun is part of a well-orchestrated campaign against the American dance and music company, Lee said. He touched on a few: cyber-attacks on Shen Yun’s ticketing website, hiring thugs to slash Shen Yun’s bus tires, and mobilizing commentators to post negative reviews online.

Also, Chinese embassies and consulates around the world have contacted theaters, urging them not to sign contracts with Shen Yun or to cancel existing ones. When that fails, the regime arranges for people to pose as Falun Gong practitioners, said Lee, and to send letters with nonsensical or offensive content, creating negative impressions of Shen Yun and Falun Gong.

Regarding the article, Lee conceded that there is the standard disclaimer on the top of the page, “An Advertising Supplement to the Washington Post.” However, Lee said that practitioners believe that “the Post cannot be completely absolved from responsibility for what it prints.

“Would the Post print an advertisement with anti-Semitic or racial slurs?” he asks. Obviously, the Post would draw the line there. Yet the Post did print an article by a foreign regime attacking an American arts company.

“We request that the Post issue a public apology for carrying China Daily’s attack on us,” said Lee.

The Falun Dafa Association sent letters, with content like what was discussed at the news conference, to Washington Post owner Jeff Bezos and publisher and CEO Frederick Ryan, and awaits their response.

On the blasphemy charge, New Tang Dynasty Television, interviewed Dr. Juliana Geran Pilon, author and senior fellow at the Alexander Hamilton Institute for the Study of Western Civilization (AHI).  “Communism by its very nature rejects belief in God. ‘Blasphemy’ is not a concept they can use without hypocrisy,” she said.

Lee also noted how ironic it was for an atheistic regime to claim that Shen Yun is committing “blasphemy to real art.” During Mao’s Cultural Revolution (1966-1976), the Party assaulted China’s traditional culture, destroying religious and historical artifacts, desecrated monasteries and other religious sites, and condemned non-Communist literature and art.

The reason the communist regime attacks Shen Yun can be understood in this context of traditional culture. Shen Yun takes as its starting premise that China’s traditional culture was divinely inspired—a gift from heaven. The Chinese people in past ages believed in living in harmony with the universe, and “believed in the oneness of heaven, earth, and humankind,” Lee said.

In contrast, the Communist Party advocates “struggle” against nature and man, and struggle between peoples—the reverse of the harmony that underlies Shen Yun. The Communist Party sees traditional culture as a threat to its existence, and seeks to eradicate it, said Lee.

“Though one can still find traces of traditional Chinese culture in mainland China, it is no longer mainstream and the underlying spiritual essence is mostly lost,” Lee said.

Lee noted that the online version of the paid insert is even more misleading than the print version. The print version states in a light font, small print, at the top of the page, “An Advertising Supplement to the Washington Post,” which a reader could easily overlook.

The online version under the WashingtonPost.com domain blurs the line between advertisement and content even further.

In 2001, James Fallows wrote in The Atlantic, “Official Chinese Propaganda: Now Online from the WaPo!,” pointing out how the URL chinawatch.washingtonpost.com can fool readers that it’s a Washington Post blog on China issues. It appears like any other Washington Post article.

“The Washington Post is well aware that the China Watch section is designed to look like the rest of their paper and to fool readers…. Just because they put ‘advertising supplement’ at the top in small print does not relieve them of the moral responsibility of knowingly supporting the world’s worst human rights abuser, the Chinese Communist Party,” said Congressman Dana Rohrabacher, as reported in the Free Beacon, July 18, 2012.

Rohrabacher also believes that China Daily articles should be labeled as products of a foreign government to be in accordance with the Foreign Agent Registration Act.

At the news conference, Larry Liu, the communications director of the Falun Gong Association advised the Post to wean itself off its dependency on income from printing communist propaganda. Liu said that they are going to lose that income anyway. “The Communist Party won’t be in power forever,” he said.

He warned that if the Post, which he said he had admired greatly, waits till the very end, “they will lose more than the money but their dignity and position in history.” Liu said some American companies made business deals with Nazi Germany and after World War II ended, came to deeply regret it. “I hope [the Post] learns these lessons from the past,” Liu said.