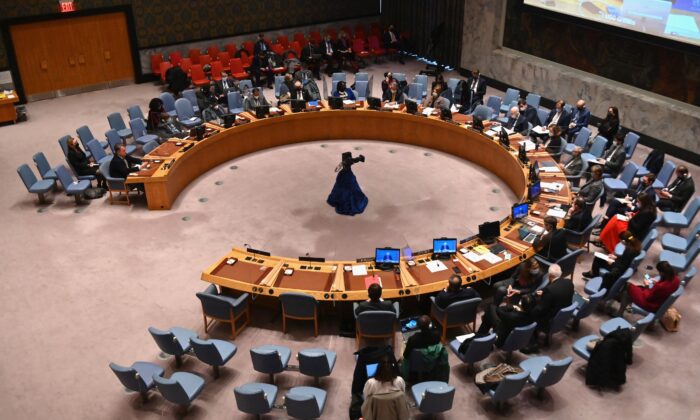 A general view of the U.N. Security Council meeting at U.N. headquarters in New York on Feb. 28, 2022. (Angela Weiss/AFP via Getty Images)
Thinking About China

Washington Kowtows to Beijing About Ukraine

The Keystone Cops were a highly incompetent police force that was depicted via slapstick comedy in silent films in the early 1920s.

Their antics stuck in the public consciousness to the point where the label has become an idiom, which is often “applied to an individual or a group that appears extremely incompetent while exhibiting an uncommon amount of energy in the pursuit of failure.”

For example, the Biden administration’s foreign policy in regards to the Russo-Ukrainian war is a Keystone Cops operation.

Before getting into the Biden administration’s kowtowing to Beijing, let us examine its other feckless actions over the past couple of months.

The expansion of NATO has been a top security concern of Russia since the demise of the Soviet Union. Yet the Biden administration publicly dangled NATO membership for Ukraine while not giving the Ukrainians any security guarantees.

On Jan. 26, during the Russian military buildup along Ukraine’s border, U.S. Secretary of State Antony Blinken told Russian Foreign Minister Sergey Lavrov that “there will be no change to Washington’s support for Ukraine’s right to pursue NATO membership.”

A video of Blinken’s short press statement after that meeting is available from The Guardian here.

The Russian military buildup provided indications and warnings that were sufficient for the Biden administration to choose to evacuate the U.S. Embassy in Kyiv on Feb. 14—just 10 days prior to the Russian invasion. But the embassy should have been kept open as a strong statement on the defense of Ukrainian sovereignty as part of a blunt warning to Moscow of a certain U.S. response to any invasion or “special military operation.”

Did President Joe Biden pick up the phone and warn Russian President Vladimir Putin about the consequences before making the decision to close the embassy? Unlikely. Weakness—a feature of the Biden administration’s diplomacy—is not a deterrent.

From Inauguration Day last year onward, the Biden administration’s green policies have driven the price of oil to over $100 per barrel (and climbing) by shutting down U.S. domestic production through a series of executive orders:

At the same time, the administration endorsed the completion of the Nord Stream 2 pipeline, which will increase Germany’s dependence on Russia for natural gas—a complete reversal of the Trump administration’s policy.

Washington also pulled the rug out from under the EastMed pipeline, which would have supplied Europe with another source of gas that would have helped decrease dependency on Russia.

Meanwhile, Mohammed bin Salman, the crown prince of Saudi Arabia, refused to take Biden’s call because U.S. support was pulled out of the Saudi war effort in Yemen. The Saudis also apparently didn’t forget Biden’s campaign promise to “make the Saudis pay the price, and make them in fact the pariah that they are,” as reported by The New York Times.

Biden refuses to reopen the Keystone XL pipeline even though Alberta Premier Jason Kenney stated on March 7 that oil from the pipeline could replace the “Russian conflict oil that’s filled with the blood of Ukrainians,” as reported by Business Insider.

Another reversal of Trump policy, this action—when completed through negotiations in Vienna—will be tantamount to providing Iran an expedited pathway to develop a nuclear device. And incredibly enough, the Russians are key players in the negotiations, with Russian diplomat Mikhail Ulyanov essentially running the show.

The deal being negotiated behind closed doors is worse than the JCPOA, as noted by the New York Post. It includes the lifting of sanctions under E.O. 13876 on 112 of Iran’s worst terrorists and torturers, as well as leading officials in the regime’s weapons of mass destruction (WMD) infrastructure.

The deal could also actually end up lifting sanctions on the Iranian Republican Guard Corps, which is the primary means by which Iran supports terrorists throughout the Middle East. Sanctions will also be lifted on the Central Bank of Iran and the National Development Fund. Both were sanctioned under U.S. counterterrorism authorities for providing billions of dollars to the IRGC, the Quds Force, and Hezbollah—all of which still fund terrorism.

Basically, the Biden administration is giving Iran a clean slate—all with the help of the Russians whom the United States is now sanctioning for invading Ukraine. What did Washington promise Moscow behind closed doors in return for assistance in concluding this Iran deal travesty? That the United States would close the American Embassy in Kyiv and slow-roll military assistance to Ukraine, giving time for the Russians to achieve their objectives?

Speaking of “slow-rolling,” how about the tragicomedy involving the Polish MIG-29s?

On March 6, Blinken announced the United States was considering sending aircraft to Ukraine and discussing the issue with NATO countries, while claiming to be coordinating specifically with Poland to guarantee that any Polish aircraft provided to Ukraine would be “backfilled” by the United States.

Not so fast, said a Polish spokesman from the prime minister’s office, who dismissed “reports” that Poland would provide aircraft to Ukraine.

Then, on March 8, Poland announced a plan to transfer all of its MIG-29 aircraft “free of charge” to Ramstein AFB in Germany, with the assumption that the United States would ship those aircraft to Ukraine. The Pentagon then announced later that same day that the Polish plan was “untenable.”

According to Fox News, Pentagon Press Secretary John Kirby stated, “It is simply not clear to us that there is a substantive rationale for it,” and that is was “too risky.”

Well played, Keystone Cops! Negotiate in public for something that could have a real impact on the ground in Ukraine, and then pull the rug out from under Poland after deciding the plan was “too risky.”

Perhaps the most feckless and absurd of the machinations of the Biden administration was the attempt to try to get communist China to “help” in forestalling the Russian invasions. That would be the same China that many Americans recognize to be an existential threat to the United States, and which has been angling to replace America as the world’s leader for years.

The U.S. intelligence community just released its “2022 Annual Threat Assessment” that identifies China as the number one threat to the United States! Yet apparently, with the same indications and warning data that precipitated the closure of the U.S. Embassy in Kyiv (and who knows what other classified information in hand), the Biden administration “urged China’s government behind the scenes to help persuade Moscow against going to war in Ukraine,” according to the Times News UK.

Former U.S. Ambassador to the United Nations Nikki Haley—among others—said she was “mortified” by this action, stating: “You can’t trust Xi. You can’t trust China. … You never ask an enemy for help with another enemy.”

Yet that’s what the Biden administration did, even after the Russians and Chinese announced their budding alliance in a joint statement on Feb. 4. Did the administration really believe that the United States had any leverage at all in trying to convince China to dissuade Russia from the invasion?

There was no aggressive Biden administration plan to deter the Russian invasion of Ukraine, nor were there any pre-planned responses after the invasion started. The U.S. diplomatic chaos on the world stage is embarrassing.

The behind-the-scenes actions in restoring Obama’s JCPOA with Iran—and removing almost all sanctions against Iran with the help of the Russians—are against America’s best interests and will reignite the flames of Iranian-backed aggression in the Middle East.

Lastly, Washington’s kowtowing to Beijing in order to solicit Xi’s assistance in preventing the Russian invasion is the ultimate Keystone Cops action. The Chinese Communist Party must be having a good laugh at America’s expense.