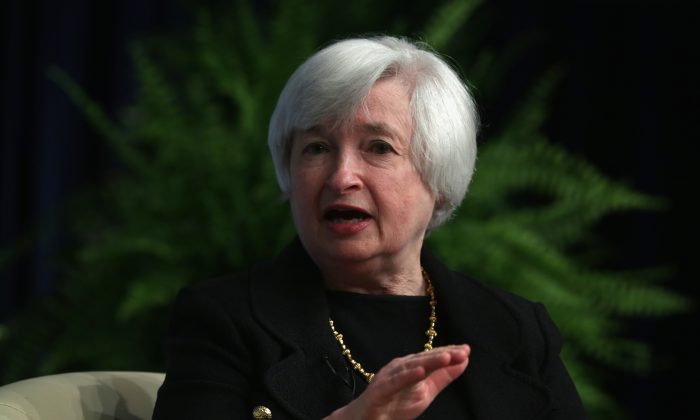 Federal Reserve Board Chairwoman Janet Yellen participates in a discussion at the International Monetary Fund (IMF) July 2, 2014, in Washington, D.C. Yellen testifies July 15 and 16 before the U.S. Congress about the health of the U.S. economy. (Alex Wong/Getty Images)
Opinion

Washington Debauchery and the Fed Follies

Federal Reserve Chairwoman Janet Yellen will testify to Congress Tuesday and Wednesday about the economy and future Fed policy.

We won’t learn much about either, because the Fed refuses to recognize the facts on the ground.

Its policymaking committee recently stated inflation is below 2 percent. Yet, according to the Bureau of Labor Statistics, consumer price inflation has been accelerating since March and is now 4 percent.

The Obama recovery has delivered 2.1 percent annual gross-domestic-product growth. That’s about the same as the Bush expansion, but half the pace accomplished during the Reagan–Clinton era.

And the Bush–Obama economy has created 6 million jobs, whereas it would need 40 million to match the Reagan–Clinton record.

The unemployment rate has fallen steadily in recent months, mostly because so many jobless have quit looking for work and are no longer counted. For native-born Americans, the problem is absolutely dire, because nearly all the new jobs have gone to immigrants.

America’s large universities, banks, and technology companies have successfully pressured the Obama administration to permit virtually uncontrolled immigration to push down wages for higher-paying science, technology, and finance occupations, and in lower paying industries, such as hospitality, where most of the employment growth has occurred.

President Obama obliges, because Asian and Hispanic voters, who favor lax immigration enforcement, make the critical difference for Democrats in swing states such as Virginia.

What stifled growth and jobs creation during the Bush years hasn’t been addressed by Obama, and the Fed can’t fix it. The huge trade deficit was responsible for half the 2.9 percent first-quarter drop in GDP, and more burdensome business regulations, which add more paperwork than accomplish results, are driving investment to China.

The regulatory morass is rooted, for example, in the administration’s reluctance to acknowledge Wall Street banks, such as Citigroup and JPMorgan Chase, are too big to manage or regulate effectively.

A solution requires breaking up banks in the manner of Glass–Steagall, but that would disrupt the flow of political cash from bank executives to congressional coffers.

The Fed’s low interest rate policies and rosy assessments of the economy distract media and broader public attention from these follies and corruption and permit politicians to demagogue the jobs crisis.

According to the Congressional Budget Office, the president’s proposal to raise the minimum wage to $10.10 an hour would kill 500,000 to 1 million jobs. Add in the jobs lost in jurisdictions such as California and New York City, which have minimum wages above the federal standard, and the upper end estimate becomes more likely correct.

Former Fed Chairman Alan Greenspan was not shy to tell Congress the limits of monetary policy in the face of administration and congressional debauchery.

If Yellen truly appreciated the reality of ordinary Americans—or simply acknowledged the federal data sitting on her desk—she would tell Congress that inflation is threatening, and enumerate the trade, energy, and regulatory policies that constrain growth and make monetary policy impotent.

Sadly, that is not about to happen, and ordinary Americans’ living standards will continue to be punished by the Fed’s inflationary policies. Wages will continue depressed and jobs scarce thanks to the president’s drive to ensure a political realignment favoring Democrats by enabling an endless tide of Asian and Latin American immigrants.

Peter Morici, professor at the Robert H. Smith School of Business at the University of Maryland, is a recognized expert on economic policy and international economics. Previously he served as director of the office of economics at the U.S. International Trade Commission. Follow @pmorici1