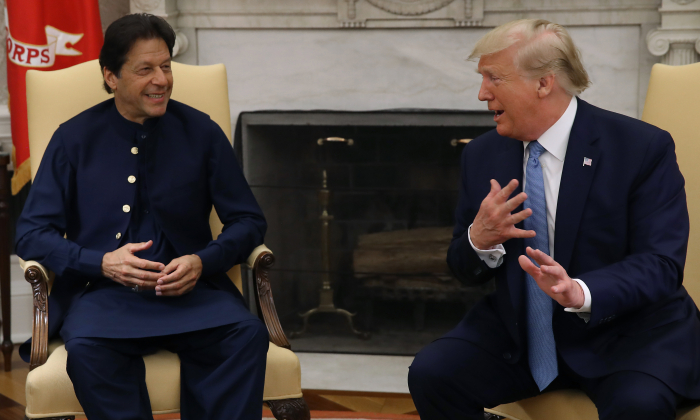 President Donald Trump and Prime Minister of the Islamic Republic of Pakistan, Imran Khan, speak to the media during a meeting in the Oval Office at the White House on July 22, 2019. (Mark Wilson/Getty Images)
Trump Administration

Pakistan Helping US to Push Taliban for Ceasefire

President Donald Trump told reporters at the White House on July 22 that Pakistan is helping the United States to pressure the Taliban to commit to a permanent ceasefire and agree to talks that include the Afghan government.

Pakistani Prime Minister Imran Khan and Trump met at the White House as part of an official state visit.The two leaders agreed that the United States is closer than ever to a peace deal with the Taliban in Afghanistan. According to the White House, Trump had planned to use the visit to urge Khan to ramp up a recent crackdown by Pakistan authorities on terrorist and militant groups.

“And we hope that in coming days, we will be able to urge the Taliban to speak to the Afghan and come to a political settlement,” Khan told reporters in the Oval Office.

“Apart from Afghanistan, the country that wants peace in Afghanistan is Pakistan,” Khan said. “Pakistan needs stability. We have had 15 years of fighting this war on terror. … We desperately want peace, and we are happy President Trump has pushed this forward.”

“What the prime minister just said is a really big story, and it’s 100 percent true. We’ve made a lot of great progress over the last couple of weeks. And Pakistan has helped us with that progress,” Trump said.

In 2018, the Trump administration suspended more than $1.2 billion in anti-terror aid for Pakistan in a bid to force the county to intensify the battle against terrorists who operate in its territory.

Speaking to reporters at the White House on July 22, Trump said Pakistan is “helping us a lot now” and noted that he will soon know if the progress has been significant enough to reinstate the aid.

“I think Pakistan could do a lot with respect to Afghanistan,” Trump said. “Pakistan could have done a lot, but they chose not to, and that’s because they did not respect U.S. leadership.”

The president revealed that he has a plan for possible military action in Afghanistan, but to avoid mass casualties, would rather not move forward with it.

“There is no military solution in Afghanistan. If you go all-out military, millions and millions of people will die,” Khan said.

Pakistan has made initial steps to combat terror, including pledging to seize the assets of some terrorist groups. On July 17, Pakistan arrested Hafiz Muhammad Saeed, a terrorist with a $10 million U.S. bounty on his head. A senior Trump administration official noted that Saeed had been arrested and released six times since a major terror attack in India in 2001.

“So we would look to see that Pakistan is taking sustained action and actually prosecuting these people,” the official said.

Trump needs Pakistan’s help to end the United States’ military involvement in Afghanistan. Khan was expected to use the visit to mend relations with Washington and attract much-needed U.S. investment.

“This is a critical time,” Khan said. “What we want is understanding between the countries. I can assure President Trump whatever we are saying, we will be straight with them. There will not ever be any doubt about Pakistan’s intent.”

Pakistan has yet to release Shakil Afridi, the jailed doctor believed to have helped the CIA hunt down Osama bin Laden, the mastermind of the Sept. 11, 2001, attacks on the United States.

Khan hinted that Afridi may soon be released. His imprisonment has long been a source of tension between Pakistan and the United States.

“President Trump, we will be giving you good news about the hostages.”