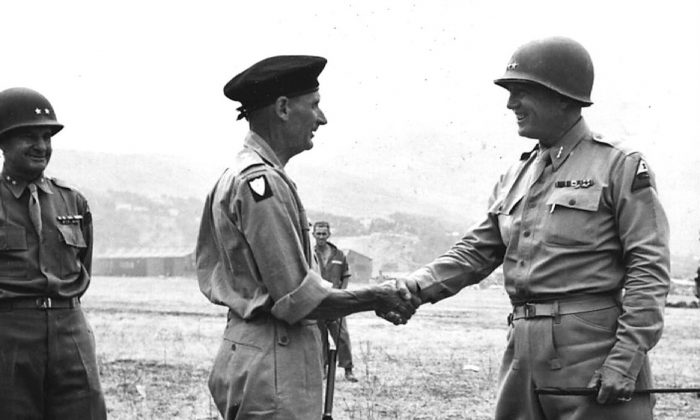 Labeled a strong, charismatic, and somewhat eccentric general, George Patton is considered one of America’s brightest generals of World War II and of American history overall. But the events surrounding his death cast a lingering shadow of mystery. Was his limousine accident in fact a clever assassination?

At the end of World War II, General Patton was an outspoken critic of the USSR during a time when the Allied Forces were aligned with the Soviets. Patton made several enemies on both sides of the fence and his outspoken nature threatened the postwar arrangements the Allies had in mind for Europe and the United Nations.

Born in San Gabriel, Calif., in 1885, Patton began his military career at West Point. He graduated in 1909 following a military tradition in his family, which can be traced back to the Civil War.

His first military battle experience was in 1915 along the Mexico-U.S. border, where he led troops against Pancho Villa’s forces. Additionally, he served as aide-de-camp under General John J. Pershing during the unsuccessful campaign against Villa in Mexico.

During World War I, he commanded the U.S. Army Tank Corp, which was the first of its kind.

Patton’s career ascended dramatically during World War II. He was originally assigned to command the First and Second Armored Division in North Africa, where he turned the tide of battle in favor of the American side after a series of defeats in 1943. There he earned the nickname “Old Blood and Gut” from his men which means that they supplied the blood, while Patton supplied the “guts.”

He was later tasked with commanding the U.S. Seventh Army in the invasion of Sicily. By the summer of 1944, he and his men had swept across northern France and by the end of that year he was a major player in the defeat of Germany in the Battle of the Bulge. His conquests continued as he marched his men across the Rhine into Germany capturing 10,000 miles of territory and liberating Germany from Nazi rule.

The controversy started after Germany’s surrender. The General was very outspoken with his views on the cleanup of Germany and the Allies’ friendship with Soviet Russia. After an interview in which he criticized how the allies were handling war-torn Germany, Patton was relieved of command of the Third Army by General Eisenhower in October of 1945. By the end of that year, he was dead.

It was a Sunday and Patton was on his way to a hunting trip. He was planning to leave Europe the next day. Suddenly, a large U.S. Army truck pulled out in front of his limousine on a deserted two-lane highway near Mannheim, Germany. Patton’s aid and driver were uninjured, but the crash left Patton with a severely broken neck.

He was rushed to a hospital 20 miles away where he was expected to pass away. However, in the week to follow he made a surprising recovery and was readying to take a trans-Atlantic flight. He relapsed, however, and died as a result of a blood clot.

The mystery of his death revolves around several factors: it was an off day for personnel when the accident occurred, no one else was injured in the crash, the driver and passenger(s) of the truck were never seen or heard from after the accident, there was no autopsy, reports and investigations into the crash have disappeared from records, and certain witnesses have come forward claiming foul play, according to the New York Post.

“There were a lot of people who were pretty … glad that Patton died,” said Charles Province, president of the George S. Patton Historical Society, according to The Telegraph. “He was going to really open the door on a lot of things that they screwed up over there.”

According to the book “Target Patton,” by military historian Robert Wilcox, the plot to assassinate Patton was hatched by the Office of Strategic Services (OSS) head General William J. Donovan and carried out by Douglas DeWitt Bazata.

Bazata, who died in 1999, was a celebrated marksman, an artist, and a decorated soldier with four purple hearts, a distinguished service cross, and three French croix de guerres. He joined the OSS, which was the precursor to the CIA, in 1942.

Wilcox paints a portrait, using Bazata interviews and diary extracts, of a staged auto accident in which Bazata shot Patton with a low-velocity projectile, breaking his neck. When Patton began to recover from his injuries, Soviet agents allegedly poisoned the general.

Supposedly, Patton was threatening to come forward regarding then Supreme Allied Commander Dwight D. Eisenhower’s actions during the war. Eisenhower reallocated Patton’s gasoline supplies to British General Bernard Montgomery. If Patton had gotten the supplies he needed, it’s possible he could have taken Berlin early and before the Soviets, ending the war earlier and saving American lives.

According to The Telegraph, Wilcox said, “I don’t think Dwight Eisenhower would ever have been elected president if Patton had lived to say the things he wanted to say.”