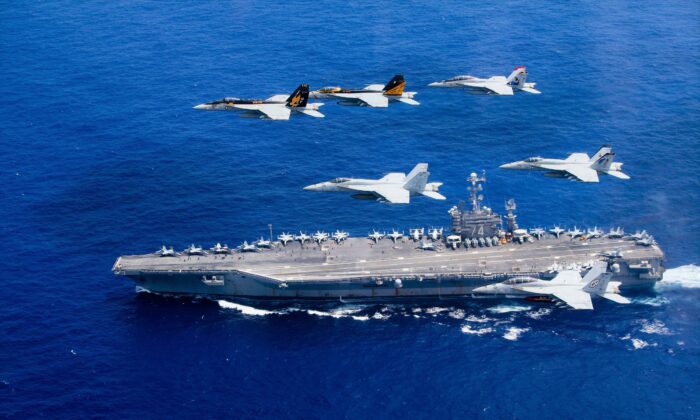 Wars and Rumors of Wars

Washington and Beijing are engaged in widely different information dominance wars to pursue their separate global strategies, but the outcomes are likely to be no less decisive than hot wars.

How can we view these great trends with equanimity?

Global competition is more subtle than just periods of formal warfare and informal warfare (peace). Rather, the philosophical view expressed in the New Testament (Matthew 24:6) is helpful: “And ye shall hear of wars and rumors of wars: see that ye be not troubled: for all these things must come to pass, but the end is not yet.”

In this new warfare, armed forces play their role largely by projecting confidence, power, capability, and prestige. But not, unless all else fails, to fight. As Sun tzu said: “To fight and conquer in all your battles is not supreme excellence; supreme excellence consists in breaking the enemy’s resistance without fighting.”

So, for Beijing, this perception dominance includes imagery of its sleek People’s Liberation Army elements performing on land, sea, and air; and it includes discreet, financially-enhanced negotiations to both further Beijing’s strategic reach and to diminish its opponents.

The U.S. government, particularly during 2021, has relied heavily on its control of information outlets, international financial networks, traditional investments, and dominance of the “rules-based world order” (alliances) to achieve its strategic objectives, bolstered by the long-standing (but declining) prestige of its global military reach.

Russia, meanwhile, bides its time to rebuild its economic and technological momentum, and to begin wooing back some of its former global influence.

To be forced into precipitous military conflict before the outcome could be guaranteed was what doomed Japan with its December 1941 attack on the United States at Pearl Harbor, and Argentine military leader Lt.-Gen. Leopoldo Galtieri with his attack on the Falkland Islands in 1982.

It is likely, then, that the present global conflict situation will continue to escalate through perception dominance warfare until and unless one of the major players sees that its situation is irretrievably lost unless it gambles on a military confrontation.

Most warfare is conducted by governments without the conscious knowledge of most societies, including their own. Thus, strategic outcomes are mostly determined before any resort to formal kinetic action, either by the checkmate effects of the aggregate “correlation of forces,” or by the recognition of dependencies by one society on another that preclude freedom of movement.

It is a prerequisite of such forms of strategic maneuver that the credible threat of military action must be always present, and that this threat be demonstrated through proxy kinetic action or indirect military action.

It is significant that, as 2022 approaches, the CCP has escalated its threat of military conflict against Taiwan even though such a conflict would: 1) be extremely questionable as to its outcome; 2) engage a military response by Japan to protect Taiwan; 3) likely engage U.S. forces in support of treaty obligations to Japan (and Taiwan?); 4) and trigger a military action by India on China’s Tibetan Plateau border, leading to a severing of the Chinese landbridge through Pakistani-controlled territory to the Indian Ocean.

Thus, the CCP’s objectives in such verbose “wolf warrior diplomacy”—saber rattling—must either be to secure Taiwan’s surrender to Beijing’s demands (unlikely), or to convince allies and foes at home and abroad that the CCP remains the “inevitable” power of the future, despite the fact that all economic and resource indicators point to the reverse of that “inevitability.”

“Rumors of war” are thus war in their own right. It is, in modern parlance, “information dominance warfare,” or strategic psychological warfare. In the CCP’s case, this is by no means a single-strand information operation. It is, instead, a complex array of political, economic, legal, sociological, trade, resources, and other tools, as outlined in its 1999 doctrine, “Unrestricted Warfare,” and explained in my 2020 book, “The New Total War of the 21st Century and the Trigger of the Fear Pandemic.”

The United States began its own strategic responses to China when Donald Trump came into office in 2017. The Trump Doctrine, however, was not continued by the incoming administration of Joe Biden in 2021. The Biden approach was to accommodate and absorb the PRC strategic expansionism through conciliation.

“Rumors of war” thus became one of the most significant tools of the Biden administration immediately after it took office in January 2021. Its approach to entering conflicts was, like that of the Clinton administration in the Balkans in the 1990s, to postulate a crisis—particularly a humanitarian crisis—and introduce U.S. military and political elements to “solve” the crisis.

It is, however, worth asking whether the Clinton, Obama, and Biden form of indirect warfare effectively addresses the achievement of global U.S. interests, or whether it focused on a reactive opportunism to exploit potential crises. Equally, it is worth studying whether the CCP’s “wolf warrior diplomacy” and associated forms of strategic amorphous warfare effectively address the long-term needs of China, or whether they are counterproductive.

The CCP’s immediate objective has been to buy time. Xi is aware that he is strategically under pressure, but must appear strong until he wins re-election for an unprecedented third term at the October 2022 CCP 20th Party Congress. He seems likely to achieve that re-election, despite the decline in China’s economy and strategic outlook. So the apparent counterproductive nature of the “wolf warrior diplomacy”—which has, in fact, built resistance in many of the states attacked by the PRC, such as Australia—will have been worthwhile for Xi by giving the appearance of confidence and strength to the domestic Chinese audience until the Party Congress has passed.

Once the re-election has occurred, Beijing’s change of direction back to a lower-economy Maoist state can occur with Xi still in full control. Xi’s hope, though, is that the economy and stability of his rivals—the United States and its allies—will also have been degraded proportionately, removing the external threat to his and the CCP’s control of China.

That, at least, is a coherent strategy, if not one that ensures rising prosperity and security for the Chinese people. The goal of “global hegemony” by 2049, originally stated by Xi in 2018, has quietly been abandoned. China lacks the wealth and assets to achieve it.

But what of the strategic goal of the Biden global policy?

It lacks the coherence of Xi’s path, but it is equally about the preservation of power for the Biden team and its Democratic Party.

So would current U.S. international actions—particularly the incitement of “rumors of war” in Ethiopia and in the Russia-Ukraine area—play well to U.S. audiences? There has been a strand of Democratic Party policy under Clinton, Obama, and Biden that has sought stature through international military action, in the Balkans, Syria, and now Ethiopia and Ukraine.

Prestige and credibility exist only while in a latent stage, as strategic energy. Once used, like cash or energy, they are gone, and the power of the user of this prestige and credibility is diminished, unless more credibility and prestige is achieved than is expended in the operation. Thus, current U.S. attempts to induce conflict in Ethiopia in favor of the marxist Tigray Popular Liberation Front (TPLF) rebel group, or to induce Ukraine to begin a shooting war against Russian interests (because Russia has no impetus to initiate such kinetic action), seem to offer little chance for improved strategic power for the United States.

U.S. attempts to use information warfare (“rumors of war”) to achieve a strategic position in Ethiopia or Ukraine without resort to military action somewhat mirrors Xi Jinping’s use of “rumors of war” to achieve an outcome without use of force. Yet, we still have no understanding of how the United States proposes to improve its strategic fortunes through the wars (kinetic or psychological) that it is now undertaking in those two theaters.