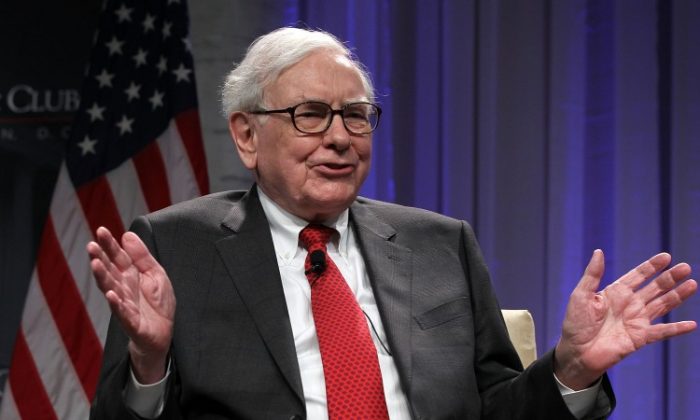 To Warren Buffett bad news comes first when reporting to shareholders. His annual letter to Berkshire Hathaway Inc. shareholders also had its share of good news, however, and some insights into what has made Buffett the very rich man he is today.

While Warren Buffett’s annual letter to Berkshire Hathaway Inc. shareholders began with the bad news of what he called his “subpar” performance in 2012, he noted, “When the partnership I ran took control of Berkshire in 1965, I could never have dreamed that a year in which we had a gain of $24.1 billion would be subpar, in terms of the comparison we present on the facing page.”

Berkshire Hathaway Inc.’s per-share book value trailed behind the Standard & Poor’s 500 Index (S&P) by 1.6 percentage points in 2012. It is the ninth time that has happened in 48 years. If it happens again in 2013, it will be the first time Berkshire has trailed behind S&P for five years in a row.

Buffett also lamented some big acquisitions he was unable to make, but expressed hope for growth and a continued dedication to capital investment.

“I pursued a couple of elephants, but came up empty-handed,” Buffett wrote. “Our luck, however, changed early this year. In February, we agreed to buy 50 percent of a holding company that will own all of H. J. Heinz. T.”

In 2013, Buffett plans to set a record for capital expenditures. “We will keep our foot to the floor,” he wrote, “Opportunities abound in America.”

In his letter, Buffett commented on the “yardsticks” by which he and his partner, Charlie Munger, measure their business.

The partners avoid “insurance-like risks,” wrote Buffett. They prefer not to get involved in ventures that could require a large sum of money all at once if an unexpected event occurs.

“Charlie and I believe in operating with many redundant layers of liquidity, and we avoid any sort of obligation that could drain our cash in a material way,” wrote Buffett. “That reduces our returns in 99 years out of 100. But we will survive in the 100th while many others fail. And we will sleep well in all 100.”

Buffett said bargain-hunting is not always the way to go. Buying businesses cheap has backfired over the past year, but luckily, said Buffett, this has only been the case in small Berkshire acquisitions and hasn’t had much impact on the company as a whole.

“More than 50 years ago, Charlie told me that it was far better to buy a wonderful business at a fair price than to buy a fair business at a wonderful price,” Buffett wrote. “Despite the compelling logic of his position, I have sometimes reverted to my old habit of bargain-hunting, with results ranging from tolerable to terrible.”

Berkshire has spent $344 million on acquiring 28 daily newspapers in the past 15 months, reported Buffett.

While the newspaper industry tries to find its footing in an increasingly digitized world, Buffett remains confident that “Newspapers continue to reign supreme … in the delivery of local news. If you want to know what’s going on in your town—whether the news is about the mayor or taxes or high school football—there is no substitute for a local newspaper that is doing its job.”

At the annual shareholders meeting on May 4th, announced Buffett, he plans to defend his title as champion in the accompanying annual Newspaper Tossing Challenge—”The target will be the porch of a Clayton Home, precisely 35 feet from the throwing line. Last year I successfully fought off all challengers. But now Berkshire has acquired a large number of newspapers and with them came much tossing talent (or so the throwers claim). … The papers will be 36 to 42 pages and you must fold them yourself (no rubber bands).”