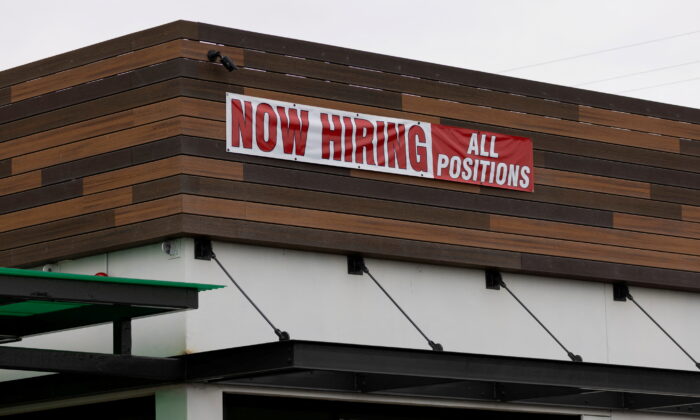 A restaurant advertising jobs looks to attract workers in Oceanside, Calif., on May 10, 2021. Mike Blake/Reuters
Economy

The phenomenon of record numbers of workers quitting their positions may persist among employees who remain unsatisfied with their jobs, according to a survey (pdf) by Randstad NV, a global provider of employment services.

This in turn has seen many businesses offering attractive bonus schemes, wage increases, and numerous other perks in a bid to entice new workers.

The record number of workers quitting their jobs is being driven by a stronger desire among employees to “enjoy life” and an increase in individuals prioritizing their personal lives over their working lives in the post-COVID-19-pandemic age, Randstad says. Meanwhile, more and more employees are prepared to go elsewhere if their needs aren’t being met.

Randstad’s survey is based on responses from 35,000 employees across 34 markets and is one of the largest studies of its kind, according to the Dutch company.

It found that 83 percent of those surveyed want work hours that complement their lives, yet only a small portion of employers are meeting that demand, with just over one-quarter of employees stating employers are offering more flexibility in both areas.

A total of 60 percent of those surveyed said their employer currently allows flexible hours, while 47 percent said they have a choice of where they work.

Roughly 60 percent of those surveyed said their personal life is more important than work life, and about half said they would quit a job if it prevented them from enjoying life.

Furthermore, one-third of the participants in Randstad’s survey said they had left a job because it didn’t fit their personal life.

Randstad says that the latest survey data points to “warning signs” that the great resignation may persist, while talent scarcity may also continue for the time being.

“That is sort of a change today: Employees are more prepared to attach consequences to their unhappiness or not getting what they want,” said Sander van ‘t Noordende, who took over as CEO of the Dutch company March 29, in an interview with Bloomberg.

“Employers really have to raise their game in terms of personalizing the work experience for every individual employee,” van ‘t Noordende said.

Randstad’s survey comes after the number of job openings in the United States reached 11.3 million in February 2022, just below the December 2021 revised figure of 11.4 million, according to the U.S. Bureau of Labor Statistics.

Resignations in the retail industry were up by 74,000 and in durable goods manufacturing by 22,000. However, job resignations decreased by 30,000 in finance and insurance.

Other studies have presented similar findings, with a November Qualtrics Employee Experience Trends Report for 2022 suggesting that fewer people intend to stay at their current jobs this year compared to 2021.

That study surveyed nearly 14,000 full-time employees from 27 countries and found that just 65 percent of workers planned on staying in their current roles in 2022, compared to 70 percent in 2021.

“They’re prepared to quit their job if they’re not happy,” van ‘t Noordende said of workers participating in the great resignation.