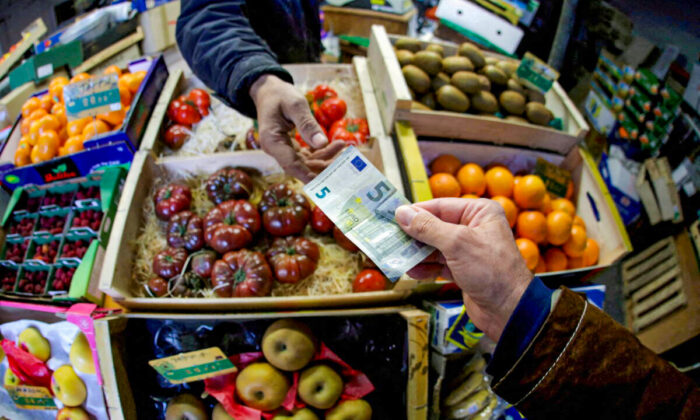 A shopper pays with a euro bank note in a market in Nice, France, on April 3, 2019. (Eric Gaillard/Reuters)
Economy

PARIS—France and Germany saw bigger than expected drops in consumer confidence this month as rising inflation and concern about the impact of Russia’s invasion of Ukraine took their toll, surveys showed on Tuesday.

The European Central Bank insists the euro zone can avoid recession, but the collapse in consumer morale in its two top economies is a setback. Italy, the third largest economy, is due to downgrade its growth targets, sources in Rome said.

In Germany, the GfK institute said its consumer sentiment index, based on a survey of around 2,000 people, dropped to -15.5 points heading into April from a revised -8.5 points a month earlier and the lowest since February 2021.

“In February, hopes were still high that consumer sentiment would recover with the easing of pandemic-related restrictions. However, the war in Ukraine caused these hopes to vanish into thin air,” GfK consumer expert Rolf Buerkl said in a statement.

Economists polled by Reuters had on average expected the index to drop to -14.0.

In France, the INSEE official statistics agency said its consumer confidence index fell to 91 points from 97 in February, falling short of economists’ expectations in a Reuters poll for 94 and the worst headline figure since February 2021.

“A fall of that extent is rare,” BNP analysts commented in a note that observed that sharper monthly drops had only previously occurred around the 1993 recession and the 2020 lockdown.

The result also ran counter to the improving trend usually seen ahead of presidential elections when optimism rises that a new political order will translate into improved standards of living.

Ahead of next month’s French election, the government has put together a package of measures worth 25 billion euros ($27 billion) to reduce the pain of high energy prices and inflation.

But that did little to ease inflation fears with the proportion of households expecting inflation to increase jumping by 50 points to its highest since INSEE’s survey began in 1972.

As part of the government measures, France has capped increases in gas and power prices, made one-off anti-inflation payouts to low-income households and offered a rebate on fuel prices.

In Germany, the ruling coalition agreed last week on a second package of measures in as many months to give people relief from soaring power, heating, and fuel costs.

Separately, the trade union-linked IMK institute forecast Germany’s economy would grow more slowly than expected and could even contract this year due to the war in Ukraine.

Its analysts predicted a base scenario of 2.1 percent growth—less than half the 4.5 percent they saw for 2022 back in December—but said a worst-case scenario including much higher energy prices could even see a 0.3 percent contraction.

The deteriorating consumer confidence is not limited to France and Germany.

Based on a flash estimate last Wednesday, euro zone sentiment collapsed in March to 18.7 points, the lowest level since the start of the COVID-19 crisis in April and May 2020.

On Tuesday sources close to the matter told Reuters that Mario Draghi’s government is preparing next week to slash its 2022 growth forecast to 2.8 percent from a previous 4.7 percent goal set in September due to surging energy costs and turmoil linked to Russia’s invasion of Ukraine.

The Ukraine war also caused the steepest decline in Belgian consumer confidence since records began in 1985, while Dutch consumer morale dropped to its lowest level in nine years in March.

Economists polled by Reuters this month expect the euro zone to grow 3.8 percent this year and 2.5 percent next, marginally down from 3.9 percent and 2.5 percent predicted last month.

By Leigh Thomas and Zuzanna Szymanska