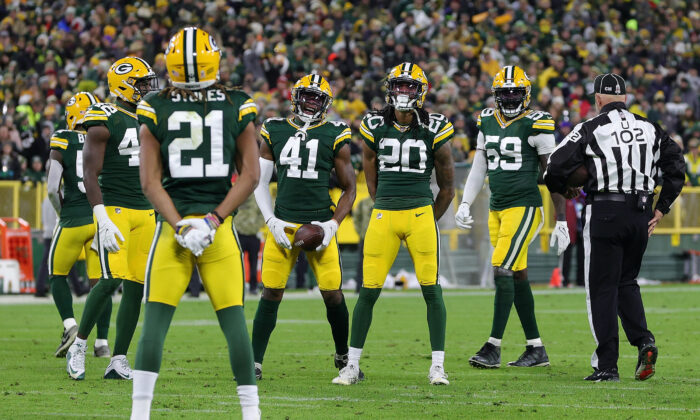 Kevin King #20 of the Green Bay Packers celebrates after an interception during a game against the Seattle Seahawks at Lambeau Field in Green Bay, Wisconsin, on Nov. 14, 2021. (Stacy Revere/Getty Images)
Business Columnists

Want to Own a Share of the Green Bay Packers? Buy a Piece of the Team for $300, but Don’t Expect Dividends or a Gain

The only publicly traded National Football League team is offering shares to the public for just the sixth time in history. Here are the details.

The Green Bay Packers are offering shares of the team for sale beginning Nov. 16.

Shares will be sold at a price of $300 each and an additional undisclosed handling fee. Shares will be limited to residents of the U.S., Guam, Puerto Rico, and the U.S. Virgin Islands.

Consumers can use credit cards, debit cards, electronic bank transfers, personal checks, or cashier’s checks to make their purchases. Shares can be bought as gifts for others.

“We appreciate the interest that fans have expressed in our sixth stock offering,” Packers CEO Mark Murphy said.

The Packers plan on using the money raised for improvements at Lambeau Field, the team’s home since 1957. NFL rules require money raised in a stock sale to be used for stadium projects and not operating expenses.

Unlike sports teams that are publicly traded on major stock exchanges, shares of the Packers can not be bought or sold and don’t appreciate in value or offer dividends.

Shares can be transferred to family members. A Packers’ stock certificate acts as the ultimate piece of fan memorabilia and as a donation to the team. Shareholders are also able to vote for the Packers’ Board of Directors.

“Stock in the Packers does not constitute an investment in ‘stock’ in the common sense of the term,” the Packers said in Monday’s announcement.

No NFL teams trade on exchanges, compared to MLB, NBA, and NHL teams such as the Atlanta Braves, and the New York Knicks and New York Rangers, which are offered as Liberty Braves Group and Madison Square Garden Sports Corp., respectively.

The Packers are the third oldest NFL team and have one of the most loyal fan bases in all of professional sports. The waitlist for Packers’ season tickets is one of the well-known stories in the sports world with more than 139,000 currently on it.

Popular sports reporter Darren Rovell put his name on the waitlist 15 years ago and sits at position 54,855 as of October, moving up around 20,000 places in the 15 years.

The Packers are valued at $3.475 billion by Forbes, ranking 13th on the annual list of NFL team valuations.