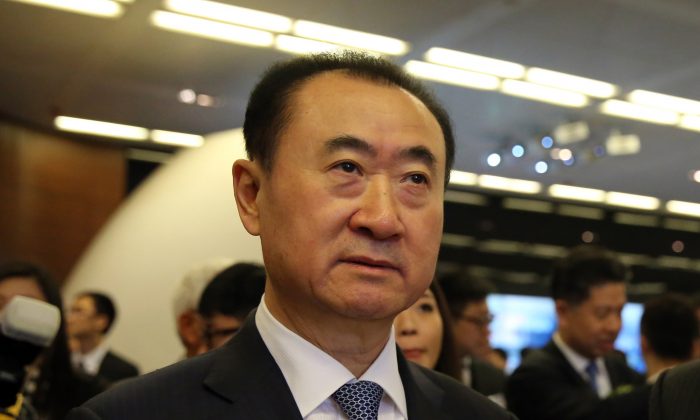 Wanda to Invest $1.74 Billion for Construction of Communist Theme Park in Birthplace of Mao’s Revolution

China’s Wanda Group, a multinational conglomerate known for its business in real estate and cinemas, has announced a 12-billion yuan ($1.74 billion) investment to build a communist-themed park and resort in Yan’an, the city that during the Chinese civil war served as the main base of the Chinese Communist Party (CCP).

Wanda’s investment comes in anticipation of the 100th anniversary of the founding of the CCP, established in July 1921 as a tiny radical group in Shanghai.

Construction is set to begin in 2019 and the park is scheduled to be opened in the first half of 2021, in time for the anniversary.

The costly move has led to speculation that Wang Jianlin, a former military officer, is making a show of loyalty to the Communist Party in hopes of guaranteeing his future political safety.

In the 1930s, with its southern base areas coming under attack from the Chinese Nationalist government, the CCP embarked on the Long March and set up a new redoubt in Yan’an, located in the northern part of Shaanxi Province in northwestern China.

Yan’an played a major role as communist Chinese headquarters throughout World War II and as the site where Mao Zedong struggled with other high-ranking cadres to become undisputed Party leader.

Because the CCP’s Yan’an era saw the massive expansion of communist influence across rural China, the city occupies a luminous position in the Party’s official history.

Accordingly, at the center of Wanda’s project is “red culture.” The Yan’an Wanda City is planned to cover half a square mile; it will feature both indoor and outdoor communist-themed attractions, a cinema, and resorts.

Xu, the Yan’an Party chief, said the park will help “deeply educate” tourists about the culture of the Communist Party.

Wang Jianlin added: “Wanda is committed to the spirit of Yan’an.”

The new venture, as well as several other Wanda projects announced and undertaken in recent years, seems like a political, rather than economic investment.

Earlier, Wanda had announced a project in the western Chinese city of Lanzhou to support China’s Belt and Road (BRI) project. Lanzhou is the capital city of Gansu Province, and an important point on the ancient Silk Road that linked China’s ancient capital Chang’an with Central Asia and Europe.

Apart from these two projects, Wanda had signed letter of intent with the city of Zunyi, another iconic site in the CCP history, to develop another communist-themed park there.

Wanda has had some success with a project in the the town of Danzhai, also located in Guizhou Province. Between July 2017 and the same month this year, the venture attracted 5.5 million tourists.

Unlike Danzhai, which is full of scenic landscapes and rich local ethnic culture, Lanzhou, Yan’an, and Zunyi have little appeal beyond their prominence in communist politics.

Loyalty to the Party

A growing number of celebrities, business owners, and officials have made expressions of loyalty to the by visiting the CCP’s iconic historical sites and encouraging tourism there.

Ma Huateng, founder of Tencent and one of the richest Chinese according to Forbes World’s billionaires 2018, and Richard Liu, founder of JD.com, visited Yan’an in June.

Jack Ma publicly claimed that he had come up with the idea to found Taobao when he visited Yan’an, and that the spirit of the Party was his “treasure.”

Wang Jianlin, Wanda’s 64-year-old founder, was listed among the richest Chinese by Hurun Global Chinese Rich List in 2016, and Forbes’ World’s Billionaires 2017. Wang joined the Chinese People’s Liberation Army (PLA) at 16 years, where he worked his way up the ranks as a 16-year career soldier.

In 1986, Wang left his position as deputy director of the Management Office of PLA Army College, and joined the Dalian municipal government in Northeast China.In August 1992, Wang founded Wanda with the city’s support. At that time, Dalian’s acting mayor was Bo Xilai.

Bo later became Dalian’s mayor and went on to become a member of the CCP Politburo. His further ambitions ended in 2012 with the Wang Lijun incident, following which Bo was investigated and sentenced to life in prison.

Next Magazine, a Chinese-language weekly published in Taiwan and Hong Kong, reported in August 2017 that Wang and Bo enjoyed a close political-business relationship in which Wang acted as Bo’s “bank” or investor.

But in the last two years, the CCP has clamped down on Wanda’s overseas activities, limiting the amount of capital it can move out of China and even forcing it to sell off some foreign assets. responding to this, in 2017 Wang said frequently that Wanda “would keep its main investments inside China.”