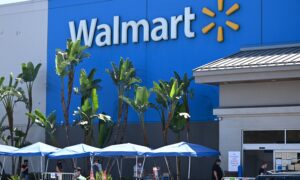 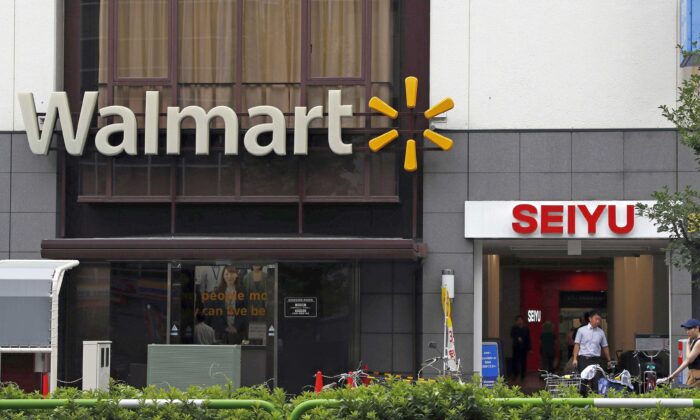 Company signs of Walmart and Seiyu are seen in Tokyo on July 12, 2018. (Kyodo News via AP)
Companies

Walmart Inc. is selling a majority stake in Japanese supermarket chain Seiyu to investment firm KKR and e-commerce company Rakuten for more than $1 billion, after years of struggling to make money amid stiff competition.

The deal, which values Seiyu at 172.5 billion yen ($1.65 billion), comes after on-off speculation about the U.S. retail giant looking to exit Japan. It is well below the 300–500 billion yen it reportedly sought a few years ago.

KKR will buy 65 percent of Seiyu while Rakuten, which already has an online venture with the chain, will acquire a 20 percent stake. Walmart will retain 15 percent, the companies said in a joint statement on Nov. 16.

The world’s biggest retailer first entered the Japanese market in 2002 by buying a 6 percent stake in Seiyu, and gradually built up its stake before a full takeover in 2008.

But it has struggled in Japan, like other foreign entrants such as Tesco PLC and Carrefour SA that were lured by the high spending power of Japanese consumers but were frustrated by tough competition.

Some analysts said Walmart, while failing to make much money in Japan, had done better than other foreign retailers considering it saved money-losing Seiyu from bankruptcy by cutting costs and improving private brand sales.

“Walmart was always going to struggle, because they had to turn around the business and also they needed to grow volume to really have a viable share in the Japanese market and the only way to do that was through more acquisitions, which it wasn’t willing to spend money on,” said Roy Larke, who specializes in Japan’s retail industry at JapaneseConsuming.

Walmart said it expects a non-cash loss of about $2 billion after tax in its fourth fiscal quarter due to the sale.

The Seiyu deal is the latest divestiture of underperforming assets by Walmart, following its exits in Britain and Argentina, as it struggled to compete with nimble local rivals. In Asia, it pulled out of South Korea in 2006 and shifted focus in China to expanding members-only warehouse chain Sam’s Club as competition from online marketplaces such as Alibaba intensified. Walmart is expanding in India, though, with its $16 billion purchase of ecommerce provider Flipkart.

Japanese media reported two years ago that Walmart was seeking to sell Seiyu, which operates around 330 supermarkets, for around 300 billion to 500 billion yen. Sources said at the time that potential buyers balked at the price.

Addressing reports that it was looking to leave Japan, Walmart announced in 2019 that it aimed to list Seiyu and retain a majority stake in the business.

But the Nov. 16 announcement also comes as Seiyu is starting to show signs of improvement, with its relatively early start in e-commerce finally yielding results, helped by a 2018 partnership with Rakuten.

Walmart Japan, mainly the Seiyu business, booked a net profit of 47 million yen in 2019 after reporting losses in most previous years. Seiyu told Reuters earlier this year that the coronavirus pandemic had bolstered interest in online grocery shopping in Japan.

Large Japanese supermarkets such as Aeon Co. Ltd. and Seven & I Holdings Co. Ltd.’s Ito-Yokado have been stepping up their investments in e-commerce as Japanese consumers, long wary of buying fresh fish and produce online, are starting to use online grocery services.

For Rakuten, the deal with Seiyu helps it fight back against rival Amazon, which recently stepped up its online grocery business by tying up with supermarket chain Life Corp.

By Ritsuko Ando and Chris Gallagher