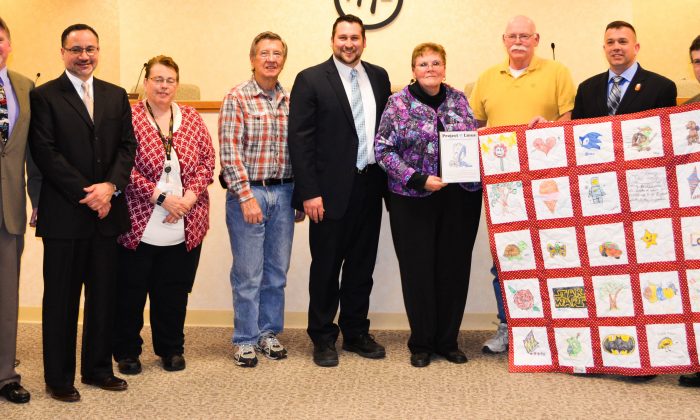 Julia Sullivan, coordinator of the Orange and Pike County chapter of Project Linus, at the Wallkill town board meeting on March 25, 2016. (Yvonne Marcotte/Epoch Times)
New York

WALLKILL—The Wallkill Town Board meeting on March 25 concluded with praise and a special thank you to Project Linus. Julia Sullivan coordinates local quilters in Orange and Pike counties and updated the board and expressed her group’s gratitude to the board for their continuing support of the project.

The nonprofit organization started locally 15 years ago and delivered its first blankets on March 28, 2001. Since then, the local group has made and given out over 33,900 blankets to children in need. Individuals who want to contribute have many ways to do so, Sullivan said. They can quilt blankets at home, collect stashes of fabric and yarn, help to stuff pillows, or do deliveries.

The Orange and Pike Counties chapter of Project Linus regularly meets at the Wallkill Community Center.

Sullivan added Pike county to the local chapter when she moved there.  “We have children from the age of 3 and 4 up to the age of 90+ that help us out every single day,” she said.

The national organization started about 20 years ago. Sullivan told the board that Project Linus has donated over 3.8 million blankets throughout the United States.

When the local chapter has all it needs taken care of, it donates to wherever the national organization says blankets are needed. Carol Babbit, national president of Project Linus, noted the work of coordinators like Sullivan.

“Thanks to our many blanketeers and our chapter coordinators, millions of children and their families have been given comfort and security at a time when they need it most. In addition, blanketeers are given an opportunity to use their talents and abilities in a most rewarding way,” Babbit said.

The local chapter donates to two camps for children of military parents, the Arlington Taps program and the Snowball Express in Texas.

Sullivan placed a blanket over the podium as she addressed the board. “This particular blanket that I have hanging here was created by children who made drawings, then they hug it, and pass it on.”

Sullivan says the local chapter gives to a variety of local agencies as well as hospitals and nonprofit social services. One meeting for the last five years has been for making cat and dog beds for local shelters. “The shelters love them,” she said. The chapter made 140 beds. More than 50 children helped out stuffing the bed pillows.

Depew was effusive in his praise. He said the quilters give blankets to the police department from time to time and do a great deal for the Wallkill community. He said that, although the quilters schedule the community center for their use, they will move to another venue if another group needs the space, which is something the supervisor appreciates. “I thank you for everything you do for the community,” he said.

Sullivan responded to Councilman Eric Valentin’s question about donations. She said they are happy to accept donations or pick up yarn or fabric stashes that people want to unload. “Many times somebody has a grandmother, even aunts and uncles, that have stashes, and we go and pick it up.” Sullivan said. Recently the group picked up 100 yards of fabric from a resident in Chester. “She was clearing out her stash.”

The local chapter is required to raise their own funds for what they need and any insurance needs. That saves us. Every blanket made by the group has a Project Linus label on it.

Charles Schultz, creator of the Peanuts comic strip, gave permission to use the Linus character and, after he passed away, his foundation has continued the permission free of charge.

Project Linus states two missions on its national website: first, to “provide love, a sense of security, warmth and comfort to children who are seriously ill, traumatized, or otherwise in need through the gifts of new, handmade blankets and afghans, lovingly created by volunteer ‘blanketeers,’ and …provide a rewarding and fun service opportunity for interested individuals and groups in local communities, for the benefit of children.”

The comfort brought to a child by a Project Linus security blanket should not be underestimated.
— Carol Babbit, national president, Project Linus

Linus’ security blanket first appeared in the Peanuts comic strip in 1954 where the character Linus carries the blanket and sucks his thumb. Snoopy has often tried to take it for himself.