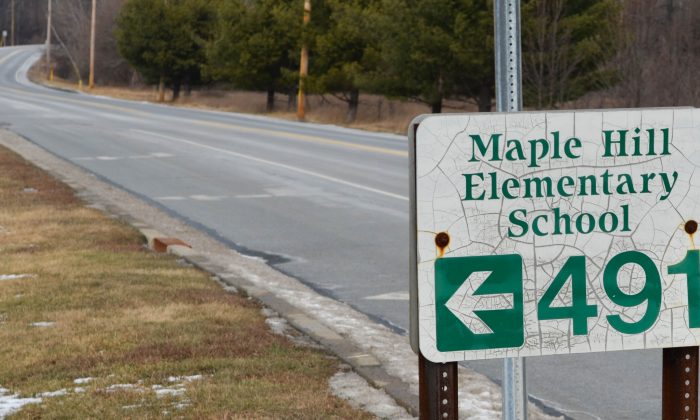 WALLKILL—Two more anonymous bomb threats against Middletown schools on Jan. 20 set the stage for a testy school board meeting on Jan. 21 and for Wallkill’s town supervisor to urge the community to get behind officials’ efforts to address the series of incidents.

The threats on Jan. 20 brought to 20 the number of “swatting” incidents against Middletown schools since June. Swatting involves hoax calls meant to cause police to deploy SWAT teams and bomb squads.

There has been a national epidemic of swatting that has left officials in cities around the country struggling to find ways to respond. Notwithstanding that no one around the nation has found an effective way to deal with this problem, school officials in Middletown have faced a steady drumbeat of criticism.

At a press conference on Jan. 22, Town of Wallkill Supervisor Dan Depew said he is dismayed at the criticism aimed at Middletown school officials for not doing enough and not communicating enough. He said it’s wrong.

Depew called the bomb threats “domestic terrorism” and urged the community to get behind school and local officials.

He said parents and residents might not be aware of all the work going on behind the scenes. A lot of money is being spent and a lot of manpower is used, he said, to stop swatting and find the individuals committing these crimes.

So far, one arrest has been made, of a nine-year-old child in connection with threats phoned in against Maple Hill Elementary School on Dec. 26.

The child was charged with the felony of making a terroristic threat and aggravated harassment. She was released to her parent.

When asked if the charges brought against the child were too harsh, Depew was unequivocal. “No way,” he said. “Young children who we do catch who are calling in bomb threats–there should be penalties.”

Depew wants New York’s Senator Schumer and Congressman Maloney to ask the federal government “to give us whatever resources they possibly can and work with us to bring to justice those who are doing these things.”

Parents spoke at the Middletown school board meeting on Jan. 21 about the toll the repeated lockdowns and evacuations are having on their children—and on them. And they talked about their fears that one day a threat might be real.

The key to stopping the swatting is identifying the person making the calls, and the board explained the difficulty of tracking a bomb threat that is called in.

Middletown Superintendent Dr. Kenneth Eastwood said it’s frustrating to track the threatening calls. Every call can be bounced among five to eight carriers. “It’s done strategically so they can be hidden,” he said.

Each call carries a packet of identifying information—name, address, and phone number—even if the call was spoofed, giving a false number. Unfortunately, the FCC does not require all carriers to keep this packet. Eastwood said several carriers strip out this information before they send the call through.

“It would be nice if the packets were moved through all of these stops, then these carriers, when these calls are being made, would be sending us all of this information,” Eastwood said.

“We have been investing an enormous amount of information technology to trace these calls, to stop these calls, to analyze these calls,” Eastwood said. The FCC must close the regulatory loophole to require carriers to maintain the information packet when they send calls, he said, so law enforcement can track the callers.

“The problem can be fixed by having the FCC close that loophole and require that all of the information be carried and completed inside every call and transferred every time it moves around. That’s where the problem exists right now,” Eastwood said.

Melissa Hull has a second grader who attends Maple Hill Elementary, which has received multiple bomb threats. She said teachers and administrators at the school are doing everything they can to protect the children but there needs to be security around the building if a threat were real.

Eastwood said it’s a delicate balance between protecting the school grounds and making the school a welcoming environment. The district has fortified school building security with alarm locks that notify authorities if set off. “The exteriors of our buildings are in the process of getting fully locked and alarmed.”

Before the children arrive in the morning, school grounds are swept for suspicious packages. New procedures are being developed “to manage the situation a little bit better,” Eastwood said.

A parent in the district who works as a Port Authority policeman says Middletown police could make district schools part of their daily posting. “If there is any deterrent, it’s visibility,” the parent said.

The board members said they feel the parents’ concerns.

“We absolutely care about our kids,” Eastwood said. “We understand the problem. Every time we get a phone call about these things, we all get sick stomachs because we wish we could stop it.”

School board member Pastor John Williams, who has three children in school, said the world has changed. “This is not the same world we lived in when we were younger.”

“We wish we could go back to a point when schools are not getting threatened on a consistent basis and our kids don’t have to be worried,” Eastwood said.