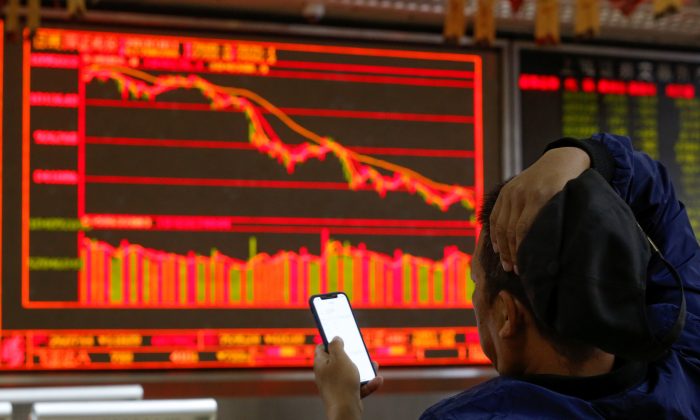 NEW YORK—Street extended its slide into a sixth session and a global equity index fell to a 1-year low on Oct. 11 as investors feared an escalating U.S. trade war with China and risks from a recent climb in interest rates.

The Nasdaq flirted with correction territory, sliding as much as 10.3 percent from its Aug. 29 closing record high, before paring losses to end off those levels and avoiding confirming a correction.

MSCI’s gauge of stock performance in 47 countries dropped 2.2 percent, falling below its February lows to trade at its lowest since October 2017.

In equities, Wall Street slid as risk-appetite showed no signs of picking up and volatility spiked. The Cboe Volatility index ended the day up at 24.98, its highest close since Feb. 12, a day after the S&P 500 dropped more than 3 percent in its biggest daily decline since Feb. 8.

“When you have a shock day like yesterday, people are caught off guard, and there are a lot of adjustments going on below the surface. There tends to be a lot of volatility the day after a shock day, and over the next several days or weeks,” said Keith Lerner, chief market strategist at SunTrust Advisory Services in Atlanta.

The selloff came as investors prepared for the start of U.S. quarterly earnings, with JPMorgan Chase, Wells Fargo, and Citigroup due to report Oct. 12

U.S. consumer prices rose less than analysts had forecast in September, reducing expectations the pace of inflation is accelerating despite a tightening labor market.

Whether the lower reading will quell expectations the Federal Reserve will hike interest rates again in December remains to be seen, said Yousef Abbasi, global market strategist at INTL FCStone in New York.

“The thing people are trying to hang their hat on is a cooler CPI read. That potentially gets us to rally,” Abbasi said.

The dollar fell to a near two-week low against a basket of currencies.