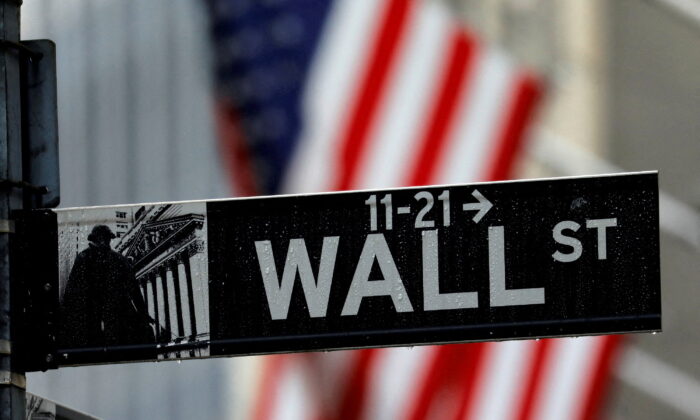 Raindrops hang on a sign for Wall Street outside the New York Stock Exchange in Manhattan in New York on Oct. 26, 2020. (Mike Segar/Reuters)
Markets

Wall Street’s main indexes slipped for the third straight day on Monday led by declines in health care and energy stocks as investors worried that another massive interest rate hike by the Federal Reserve could tip the U.S. economy into a recession.

Five of the 11 S&P 500 sectors were down in early trading. Health care stocks fell 1.5 percent, weighed by a 5.5 percent drop in the shares of Moderna Inc.

The S&P 500 and the Nasdaq logged their worst weekly percentage drop since June on Friday as markets fully priced in at least a 75-basis-point rise in rates during the week, with Fed funds futures showing a 21 percent chance of a whopping 100 bps increase.

“Markets are going to be looking for direction until the Fed meeting, there won’t be much trading action till then,” said Christopher Grisanti, chief equity strategist at MAI Capital Management in Cleveland.

The S&P 500 has lost 19 percent so far this year on worries of a central bank-induced recession amid recent warnings of slowing demand from delivery firm FedEx and an inverted U.S. Treasury yield curve.

“I think a recession is very likely. The Fed regards a recession as regrettable, but necessary to fight inflation,” Grisanti said.

Focus will also be on new economic projections, due to be published alongside the policy statement at 2 p.m. ET on Wednesday.

Goldman Sachs cut its forecast for 2023 U.S. GDP late on Friday as it projects a more aggressive Fed and sees that pushing the jobless rate higher than it previously expected.

“We think a 100 bps hike would unnerve Wall Street … and would increase the likelihood that the FOMC will eventually overtighten and lessen the possibility of achieving a soft landing,” Sam Stovall, chief investment strategist at CFRA, wrote in a note.

A rebound in industrial stocks after a sharp drop on Friday helped cap losses on the indexes.