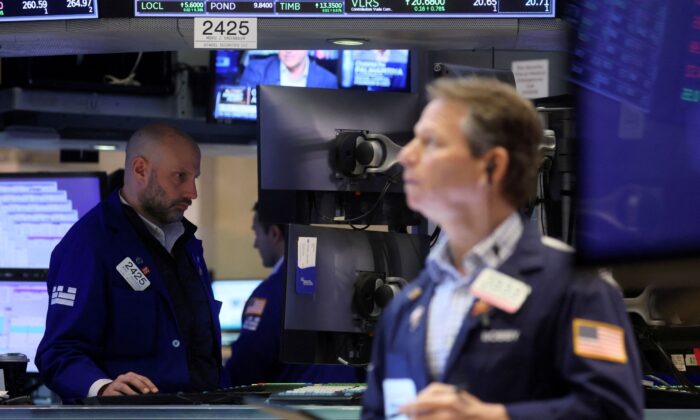 On the benchmark S&P 500, all the 11 major sectors slipped into the red, with financial stocks falling 2.9 percent, while tech and consumer discretionary stocks lost more than 1 percent each.

Russian forces invaded Ukraine in a massed assault by land, sea, and air, the biggest attack by one state against another in Europe since World War Two.

The escalation in conflict rattled financial markets as global shares slumped and oil prices broke above $100 a barrel, while safe havens gold, government bonds, and the dollar surged in the flight to safety.

The United States and its allies promised tough sanctions against Moscow after weeks of fruitless diplomatic efforts and an initial wave of modest sanctions.

Tesla Inc. dropped 2.5 percent to lead losses among the mega-cap growth names. Apple and Amazon.com Inc. fell over 2 percent each.

The CBOE Volatility index, also known as Wall Street’s fear gauge, was last trading at 36.81, its highest since Jan. 24.

“It is just the uncertainty of how serious things could get. Will Europe get involved? Will United States get more involved? We know more serious sanctions are going to come against Russia, but the fallout from that is just uncertain.”

The Dow was set to confirm a correction from its all-time closing high on Jan. 4 and was currently down about 12 percent below its record closing level.

Oil stocks Exxon Mobil Corp. and Chevron Corp. slipped more than 1 percent even as crude prices remained elevated as the attack exacerbated worries that a war in Europe could disrupt global energy supplies.